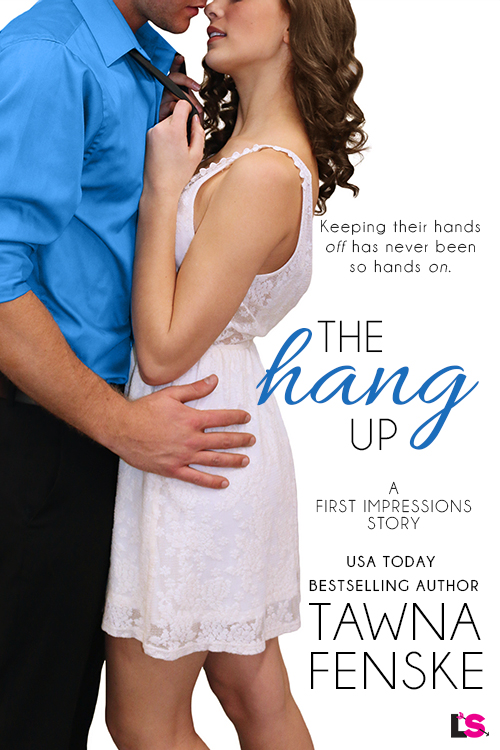 Keeping their hands off has never been so hands on…

Take a peek inside The Hang Up by Tawna Fenske!

Holly snort-laughed and nearly knocked over her glass of ice water. “God, what are the odds? Seriously—the hot naked guy in your bathroom turns out to be the new CEO for one of our biggest clients.”

“Definitely a crazy coincidence. Also, I totally lied. The look on his face in that meeting was way different from the look he had when he caught me staring at his junk.”

“I can only imagine.”

Miriam’s brain took a detour down Pervert Lane at the memory of all that glorious man-flesh on display in her bathroom. Jason Sanders looked like he’d been digitally enhanced in all the right places.

Some places more than others.

She found herself grinning at the memory, both of the meeting and the encounter in the bathroom. “It was great to see him stand up to those stuffed shirts on day one. I knew before today’s meeting that the guy had huge balls,” she mused. “It was nice to see him prove it in front of everyone.”

Both women jumped at the sound of a male voice. Miriam looked up to see Jason standing in the doorway, wearing a snug T-shirt, a pair of running shorts, and a smug smile.

Heat crept into Miriam’s cheeks as Holly gaped at him. “Tell me you didn’t just hear that,” Miriam said as Jason continued to grin from the doorway.

“No can do.” He unfolded his arms to reveal a chiseled chest that made Miriam want to rake her fingernails down his torso. As though reading her thoughts, he grinned wider and strode into the conference room. “But thanks, by the way.”

PR specialist Miriam Ashley makes her living cleaning up bad boys. Mountain climber-turned-CEO Jason Sanders should be an easy fix. And with a nephew to care for, he’s motivated. The problem? Every time she tries to help Jason get his head in the boardroom, they end up in the bedroom.

What the hell is she thinking? He’s the definition of off-limits. Not just because he’s a client—he spends his free time risking his life mountain climbing. The same thing that got her father killed. She’s not going to open her heart to a guy who could disappear at the drop of a…well, she’d rather not finish that thought.

She needs to leave complicated alone, but every time she sees Jason, something tells her it’s her who might fall…

6 Heroines We Want As BFFs

Happy New Year! The editors at Entangled Publishing are always looking for the next breakout hit. Co…

Hi everyone! I’m Jennifer Blackwood and I’m the author of Unethical and Foolproof (1/15)…