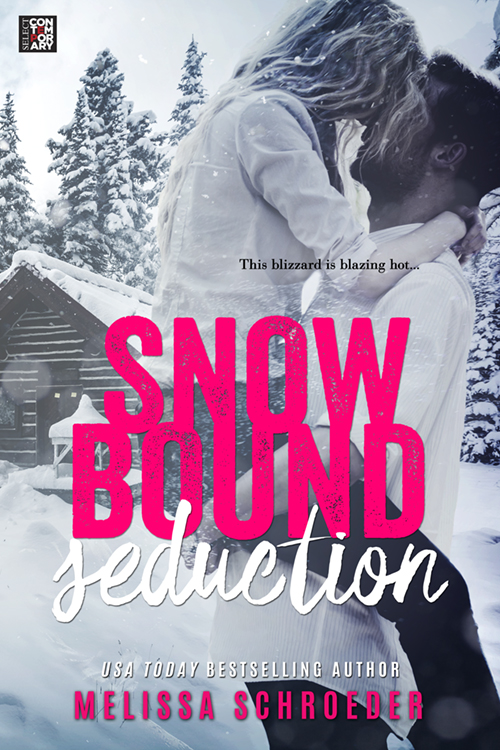 While stranded in a blizzard, an English bad boy chef and an uptight southern baker discover there is more heat than hate in their relationship.

Take a peek inside Snowbound Seduction by Melissa Schroeder!

“You said you had never had a snowball fight. Or even made a snow angel. That is just wrong, Lainey.”

“I haven’t had an enema either, but that doesn’t mean I think I need to experience one.”

He turned around laughing. When he opened his mouth to say something he was hit square in the chest with a snowball. He looked down at his chest, then up at the attacker. She looked so cute in her little knit cap and bundled up from head to tow in cold weather gear.

“You know this means war,” he said.

Her eyes widened. Trevor started after her and she took off with a very un-Lainey like squeal. He caught up to her in four steps, and they both went tumbling into the snow bank. She was laughing so hard as they rolled over the snow. It didn’t take him long to have her pinned down beneath him. Even though it was cold enough to freeze his ballocks off, heat flared in his blood. Snowflakes now littered her cap and the few strands of hair that had escaped their knit prison. Her cheeks were rosy from the cold.

Her laughter faded and she swallowed. She felt it too; she had to. That connection had snapped into place just like it always did. There was no denying the heat that was simmering between them. He bent his head for a taste, just a little taste, he promised himself. Her eyes slid closed in surrender, but the moment he was within inches of her mouth, a horn sounded breaking the moment.

Pre-order your copy of Snowbound Seduction and see how Lainey and Trevor heat things up!

Trevor MacMillian is the tart and incredibly sexy executive chef who’s made pastry chef Elaine Masterson’s life a living hell. But when she catches him in nothing but a tiny little towel, it’s almost enough to make her forget they’re stranded in a luxurious mountain cabin together…or that she hates him almost as much as she craves him like a sinfully forbidden dessert.

Being alone in a romantic secluded cabin might just kill Trevor outright. If Elaine hates him now, how much will she hate him if she finds out he’s been fantastizing about her full, kissable lips? So Trevor argues with her. Makes her angry—until an intense and unexpected kiss turns their hostility into insatiable hunger. And with this much heat, the snowstorm outside doesn’t stand a chance…

We all love romance. That’s why we’re here, right? I like to think of the most romantic coupl…