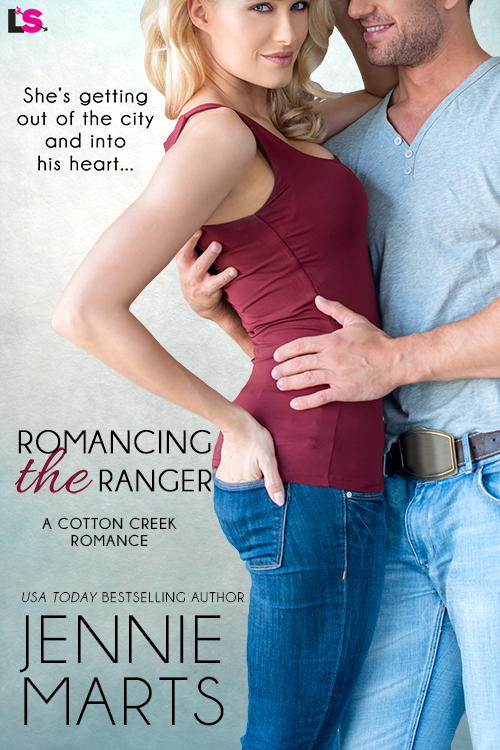 She’s getting out of the city and into his heart!

Take a peek inside Romancing the Ranger by Jennie Marts

Whoa. This guy was hot. And not just in a handsome way. In a seriously pissed off way.

She needed to tread lighter. Not make him any angrier. Hmmm. Why did this feel familiar?

Because this was what she always did. With her father.

Hadn’t the purpose of her drive up here been to take back control of her life? To throw away not just the mementos but the bad habits of trying to please everyone else and bending over backward to not get anyone upset?

The only way to quit being weak was to be assertive.No time like the present.She squared her shoulders and stared the ranger in the eye. “Look, mister. It was an accident. I said I was sorry and offered to pay for the damages. That’s my offer. What are you going to do about it?”

Thirty minutes later, she was reconsidering her decision to test her newfound assertiveness on Ranger Wade as she cooled her one dusty heel in a jail cell.

Pre-order your copy of Romancing the Ranger so you can find out how Reese gets out of this pickle!

Reese Hudson meant to destroy mementos from her last failed relationship, not burn down an outhouse and incur the wrath of a sexy park ranger. When the judge rejects her offer to pay for the structure and sentences her to rebuild it—with the hot ranger supervising—she embraces the challenge to take control of her life.

Park ranger Wade Baker wants nothing to do with the rich city girl, no matter how tempting he finds her lush curves. She’s too much like his ex-fiancée, and if he’s learned anything, it’s that women like Reese don’t fit into his world. And he sure as hell wants no part of her big city life.

Reese may not know a hammer from a screwdriver, but she’s working hard to prove she’s not just some pampered princess to be toyed with. And damn it if Wade doesn’t admire her tenacious spirit. If only they got along half as well outside the bedroom as they do in it, there might be a chance for them after all…

It isn’t often that Shirley Jump, Barbara Wallace, Jackie Braun and I have wiggle room in our schedu…

Sure, it’s not quite “No Woman, No Cry”, but I have found—for me and my particular set of wri…