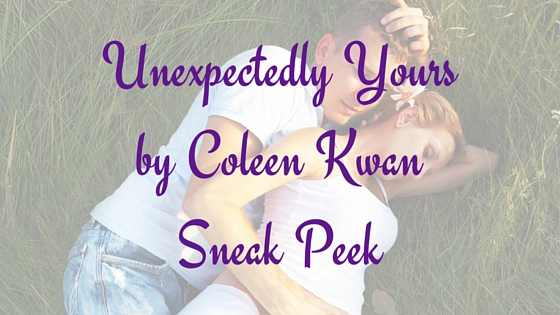 Get ready to fall in love with Unexpectedly Yours by Coleen Kwan on sale 3/14/16!

“Hey, pecan pie.” Derek beamed as he lifted the pie dish from the cooler. “You made it for me?”

“Just my way of saying thanks.”

“There are other ways of saying thanks.” His gaze drifted to her lips, leaving her in no doubt what he had in mind. “Ways just as sweet and tasty as pecan pie.”

Her trigger-happy desire surged again as she imagined his lips on hers. “God, Derek, I thought we were keeping things platonic.”

“I thought so too, but you brought pecan pie.”

“Well, yeah. That, and those shorts you’re wearing.” His gaze lowered to the denim cutoffs hugging her hips. “I think you put on those itty-bitty shorts on purpose just to torture me, didn’t you?”

She gulped. “It’s a hot day, and they were the only shorts I had.” Liar. She had other, more modest shorts, but for some reason she’d chosen these tight-fitting cutoffs with the frayed hem. Again, she blamed her subconscious.

He snickered at her, and she knew she wasn’t fooling anyone. “You’re right. It is a hot day. In fact, it’s so hot I think I need to do this.” He stretched his arm behind his neck, gripped his T-shirt, and pulled it off in one swoop. Tossing aside the T-shirt, he stretched out in the sun. “Ah, yeah. That feels so much better.”

Her mouth fell open, and she might have made a choking sound. Her eyeballs felt like they were on stalks as she gawked at Derek’s naked torso. What a magnificent sight. Sunlight bounced off his smooth pecs and bulging biceps. He didn’t have an ounce of fat on him. Hard, broad shoulders narrowed to lean hips showcased by his low-slung jeans.

He rubbed his chest, drawing her attention to the trail of fine, dark hair that tracked down the center of his body. “What’s the matter, babe?”

Babe. Heat seeped through her pores. Just one “babe” from him, and she was already melting.

“Uh, n-nothing,” she managed to stutter. For the life of her, she still couldn’t tear her eyes away from him.

She was almost panting now. Dammit, he was so devilishly tempting, but she was not going to cave in.

“Yes, I do.” She leaned toward him, slow and deliberate, until his eyes widened and he licked his lips in anticipation. Then she stretched her arm across him, brushing against his naked chest, and grabbed a bottle of iced tea. “This is what I’d like.”

She twisted the cap off and tipped a deep gulp of liquid down her throat. When she lowered the bottle, Derek was grinning at her.

Her blood fizzed like she’d drunk champagne. It was such fun teasing and flirting with Derek. It made her realize she wasn’t old after all and that Derek brought something out of her that no one else did.

“You didn’t think I’d swoon at your feet just because you bared your chest, did you?”

Want to read more? Pre-order your copy today so you don’t miss this sweet read! 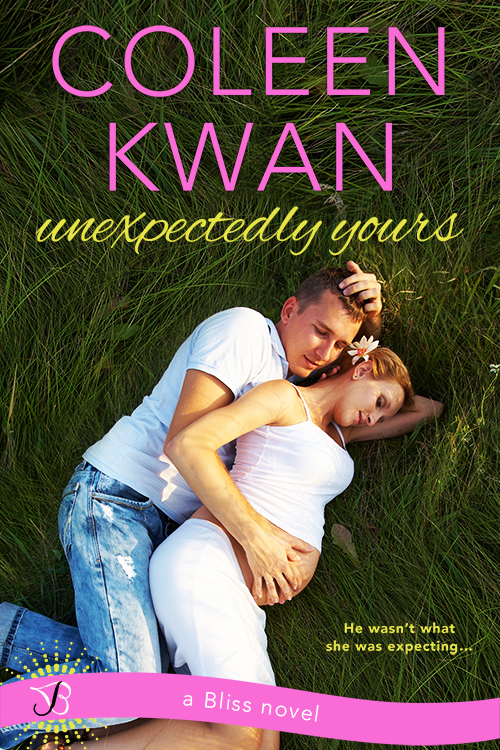 Derek Carmichael has harbored a secret crush on his best friend’s older sister for years, but she’s always been out of his reach. Now that Hannah is back in their hometown and newly single, suddenly the five-year age gap doesn’t seem so huge. But convincing her to see him as more than just the kid she used to know is another story.

Hannah Willmett can’t believe how grown-up Derek Carmichael has become. The troubled kid from her youth has turned into a sexy, successful TV celebrity, but Hannah’s wary of his player past and the rampant rumors connecting him to beautiful socialites. Still, she can’t help but give in when their attraction reaches a boiling point.

Trying to keep their fling a secret from her overprotective brother is one thing, but when Hannah finds herself unexpectedly expecting, her life is thrown upside down. She and Derek may be becoming parents together, but that’s no basis for a happily-ever-after.

Stepping on DubStep with Two Left Feet, by Teri Anne Stanley (aka the illegitimate offspring of Taylor Swift and Elmore Leonard)

Our new Brazen releases are on sale for $0.99 for a limited time only so we are holding a #Br…