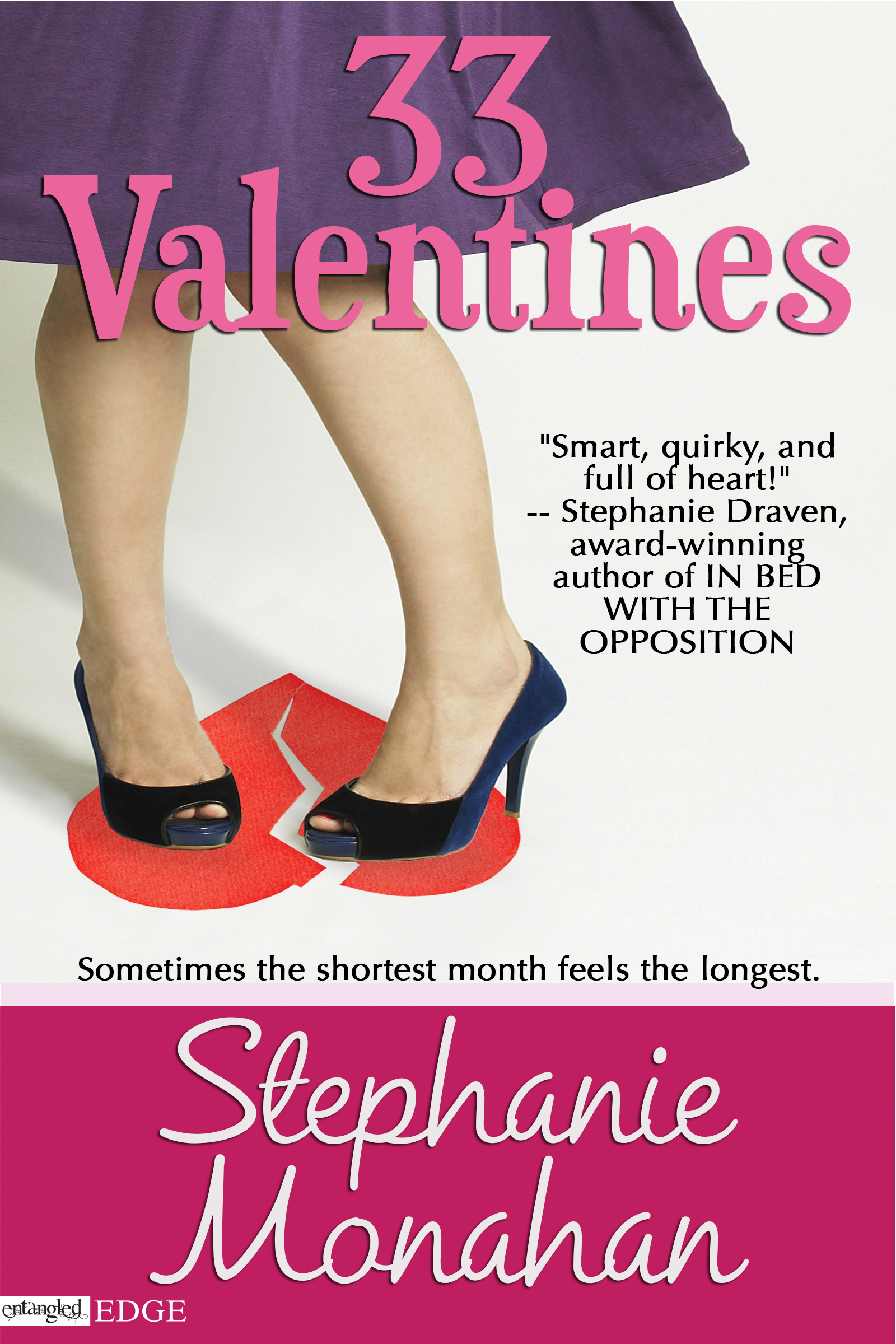 I was walking down the street in Boston’s South End when I saw the sign Naomi’s Flower Shop hanging in a storefront window. Strange coincidence—that could’ve been the name of the shop in 33 Valentines. I didn’t really have time to stop, but how could I resist?

Little bells jingled when I opened the door, just as I’d written. But I was sure lots of shops had them. Then a gray-haired woman wearing a sweater with a golden retriever patch sewn on to the front approached. She stopped to water a bamboo.

“Well aren’t you looking so pretty today?” She wasn’t talking to me; she was talking to the plant.

Okay, this was weird.

“Can I help you, dear?” She turned toward me so that I could see her nametag. Geraldine.

“Oh, well, let me know if you need anything!” She turned back to the flowers. “And aren’t you the sweetest little daffodil I’ve ever seen in my whole life…”

Alright. Well, that was weird. But surely there were women named Geraldine working in flower shops. And some of them must like talking to plants.

The doorbells jingled again and my jaw dropped.

“Sophie! Sam! You made it! Oh I haven’t seen you in so long!” Geraldine pushed by me in order to pull my two main characters into her arms. I stood there watching as they hugged her back. They looked exactly as I’d pictured, Sophie with her long reddish-blonde curls, feathery earrings and long skirt with heels; Sam with his dorky plaid blazer over an Andy Warhol Campbell Soup t-shirt and deep blue eyes.

I grabbed the skin on my arm and pinched. Yeah, still standing there. I listened to the three of them talk—wow, Sam really did have a Boston accent—while pretending to consider the daffodils.

A few moments later, I heard Sophie say, “It’s her.”

The two of them walked toward me. “I’ve always wondered what you looked like,” Sophie said.

I looked behind me but saw only a wall of flowers. “Me? You wondered what I looked like?”

Sophie and Sam exchanged a look, as if to say, she’s a strange one.

“Well, yeah. It’s only natural,” she said, “to finally see the person who put us through so much.”

Sam tapped her on the nose. “Be nice.” He gave me a sympathetic look and all I could think was that he really was tall. A quick glance down at his fingernails confirmed what I thought I’d find—paint of all colors embedded there, as if he’d just come from the studio.

“What? I am nice. I just wanted her to know that because of her, I still get shooting pains through my arm.”

My heart started to thump. How do you defend yourself from one of your fictional characters? “Look, I’m sorry. But it’s not my fault you have really bad luck in February.”

“Then who should I blame? John Grisham?”

I tried not to be hurt by the sarcasm. After all, I’d written her this way. It was one of the things I loved about her the most.

I forced myself to smile. “Actually, John Grisham and I have completely different writing styles.”

Sophie looked as if she might start to smile. Instead, she touched Sam’s arm and said, “You almost ruined his career, you know.”

“Sophie’s little vending machine incident did get me in a little bit of trouble with the department,” Sam said.

I hadn’t really thought out the repercussions of that part, at least not for Sam. “I’m really sorry. But that really helped Sophie start to understand and verbalize her feelings.”

Sophie and Sam exchanged another look. I noticed how they kept doing that, having entire conversations without ever saying a word to each other. It was actually really cute.

“I really enjoyed my growth as a character,” Geraldine interrupted. She winked at me, before disappearing back into the cooler.

“You guys seem happy,” I said.

Sophie and Sam smiled at each other. He took her hand and she leaned into him. He kissed her forehead. “She just moved in with me.”

Sophie’s face flushed as she slipped her arm around his waist. “And we’ve already booked our flight to Florida for next Valentine’s Day.”

“It’ll keep her nice and warm,” Sam said. He whispered something I couldn’t hear into her ear and she swatted him again, but kept on smiling.

She looked back at me and frowned. “Unless you’re writing some kind of screwed up sequel. Where we, like, break up or something.”

I shake my head vigorously. “No, no sequel. Definitely not.”

“You could write about a lovely mature widow on her quest to find love, perhaps with a man who has a striking resemblance to Richard Gere,” a voice floated in from behind us.

“Yeah, um, maybe,” I called to Geraldine. “Listen, I’m really sorry for everything I put you through. But, hey, it all worked out in the end, didn’t it?”

Sophie still looked slightly annoyed, but after she and Sam looked at each other her expression softened. “Yeah, it did. So do you know this place called Johnny D’s? In Somerville?” When I nodded, she continued, “I’m playing there next weekend. You should come. You know, if you’re not busy screwing up some other poor girl’s life.”

She grinned. She pulled her aviator sunglasses out of her messenger bag, placed them on her nose, and set off toward the door.

Sam leaned out and put his hand on my shoulder. “That actually went better than I expected. Hey—you really aren’t working on some awful sequel where we find out I have some sort of disease or she has an evil twin or something, are you?”

“Good.” He smiled at me, and I felt a little light-headed. Fictional character, I reminded myself. But damn, I created a hottie. “Because next Valentine’s Day, I have a little surprise in store for her.”

But I knew Sam, and I knew he wasn’t going to tell me. “I’ll send you an email,” he said. Then he walked away, looking for Sophie, chuckling under his breath. This time I would be the one who had to wait to see how it’d all turn out.

Thanks for getting wicked with Entangled! We have a few wicked sales to tempt you and a treat…