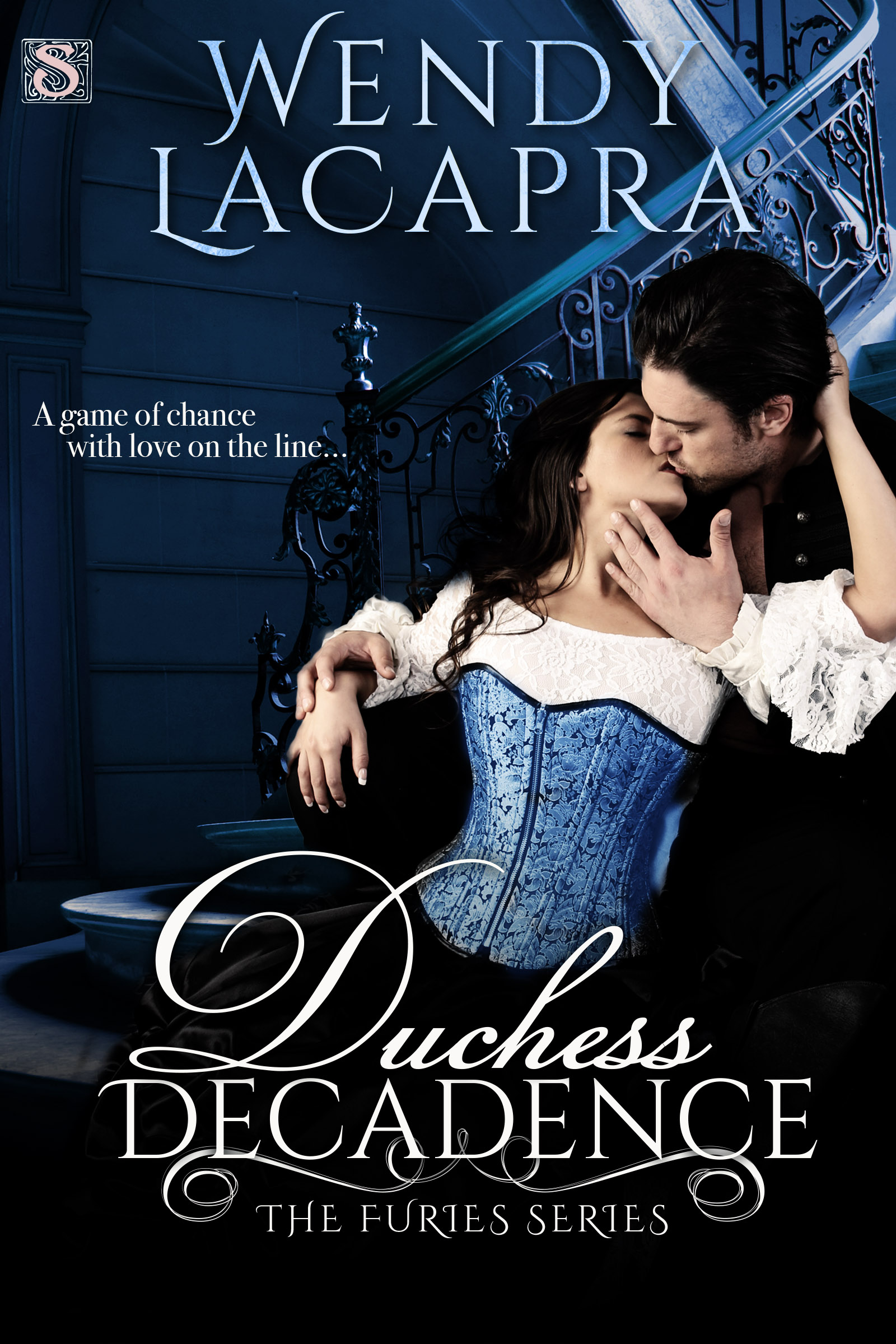 With so many amazing books out there to read how do you choose one?  Take a look inside Duchess Decadence by Wendy LaCapra and you may have just found your read for the week. 😉 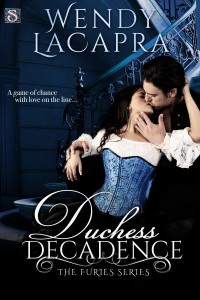 “Are you ready for our game?” she asked.

“This is no game, Thea Marie.”

“Everything is a game, Duke.” And the stakes were much higher than he could imagine.

“You can call our life a game,” his tone held a sneer, “only because society’s shaming means nothing to you.”

Thea bristled, reliving the sum of a hundred hollow looks of spite and shallow triumph that had been cast her way since she’d left Wynchester.

“Even if that were true,” she said, “I am not the one who sauntered into Sophia’s home like a leather-headed, gin-bitten drunk.”

“Not gin.” He snorted. “An exorbitant indulgence that Harrison imports—Armagnac.” He lifted his right brow. “One way or another, it seems my predisposition for decadence will be my ruin.”

“A single night’s excess will hardly be your ruin.” She frowned. “Even if it was, I would not be the cause.”

“Wouldn’t you?” Slowly, he rose from the chair, eyes hurling accusation with the same force he’d use to thrust one of the centuries-old Wynchester swords. “Every choice I made has been a sacrifice to the Worthington name and Wynchester title, the name and title you carry and have blackened without cause or feeling.”

Without cause? Without feeling? She inhaled sharply. My pregnancy ended in violence and pain because your loyalties lay elsewhere.

The words clanged against her teeth, straining to be spat in a final act of defiance that would, no doubt, result in a permanent rupture. She waited for the dark haze of anger, fear, and grief to dissipate, as she learned it would do with time and steadied breath. Old wounds may fester, but, right now, the slanderer Eustace was scheming his way back into their lives, and she believed he would be more than happy to see her husband in the grave.

She donned her most haughty expression, the one she used when returning a cut-direct.

“Well,” she said, “I never asked you to sacrifice for me.”

He held his breath as if he, too, struggled to restrain horrible words. Internally, she crumpled. Damnation. Even three sheets in the wind, he held sway over her spirit. She had courage and cunning but she hadn’t the strength. Truly, she hadn’t. And what deity in heaven or on earth would grant her angry heart Grace? The air was hot. Her skirts were heavy. Unattractive perspiration dampened her neck. She looked toward her mottled reflection in the night-dark window.

Her fingers stretched and stiffened inside tight gloves.

“No,” he repeated, “you never asked me to sacrifice for you.”

Something in his tone forced her to turn. His gaze dealt a stunning blow.

He straightened. “Let us lay the past aside. I am here, aren’t I? I responded at once to your challenge. Have you no guess as to why?”

She held his words in mental hands as if they formed the last piece of a puzzle. She turned them this way and that, but no matter which direction she tried, his words did not fit the scene she’d painstakingly created during their years of separation. She knew he wished for her return—but believed he acted for propriety’s sake, not his own.

…Yet the yearning in his gaze was not just for the restoration of appearances.

A slanted smile lifted one side of his mouth as he touched the pewter cup on Sophia’s desk. “What say you, Decadence? Shall we rattle fate?”

Want to read more? Get your copy today!

Find the Para in Normal with Candace Havens

Behind the Book with Cathy Skendrovich

We are the the prime of wedding season and Entangled wants to celebrate with you!   All month l…

Fandoms…Ever wonder how someone goes from this to this? Books have always been my safe place. If I w…