Before In Bloom was a book, it was a blog…with recipes! Here is the recipe for Liv’s guacamole along with an exclusive take on the “guacamole” scene, written from Berkeley’s perspective!

“Did I just offer to make guacamole? That’s like the equivalent of carrying a watermelon.” – Oliva Bloom 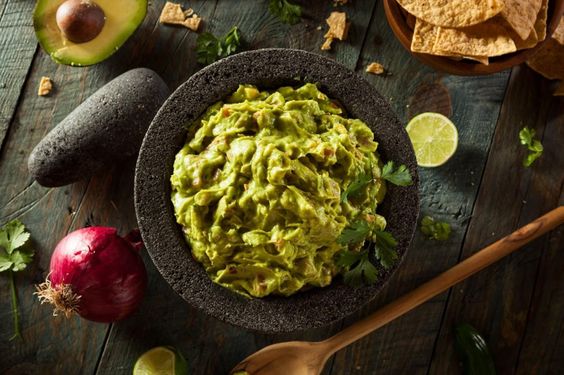 Salt and Pepper to taste

Mash or stir to combine

Sliding off the couch, she stands and makes her way across the room, eyes on the floor, completely oblivious to my eyes on her. She doesn’t make a show of herself though she easily could; she commands attention. I watch as Haynes and Jeff both notice her as well, even though they are otherwise attached. She’s impossible not to look at. Her face draws you in, asks to be studied, but I’m pretty sure she doesn’t know that. Either that or we’re too beneath her to be acknowledged, but that has never been the case with someone not as famous as us, so I give a second, tentative, point to the rabbit. In this city, when you look like her, it will at least get you a meeting, and everyone takes advantage of that.

She steps out of the room and disappears down the hall. I have no idea where she’s headed, but I know what I have to do. Observation is not going to be enough to answer my questions, so I seize the opportunity that the complaining Kim has presented and announce that I’m going to go order pizzas. The menu is in the kitchen and I figure if I head that way I’ll have to intercept Liv at some point; my house isn’t that big.

I know I have to talk to her, but as I stand and head out of the library toward the kitchen, I’m overcome with crazy stage fright, as bad as it ever is before a huge show. Like before the Grammys bad. I’m shaking and pretty sure that my vocal cords are frozen, my throat locked tight.

Coming around the corner, I find where there rabbit has disappeared to. Her back is to me and she’s tentatively opening drawers at the kitchen island. Upon seeing her, as he always does when I’m about to perform, stage Berkeley takes over and I’m grateful for him because I won’t be able to talk otherwise. Funny that when I’m in alone in my kitchen with her I’m on stage but when I was on stage in Santa Barbara in front of her, I was alone.

Without dwelling on those implications, I let stage Berkeley do the talking as he assesses the situation. Taking in the three Pacifico’s and a lime lined up on the counter, I intuit that she’s looking for a knife.

“Third drawer on your right,” he says, my nerves beginning to evaporate and my voice coming out strong and smooth, except for the very South African sounding, “right.” Closing my eyes, I will myself to pull it together, further conjuring my stage persona.

While I stare at her back, she makes me wait a beat before she acknowledges me, and spins around in a slow-motion reveal.

Completing the turn, she raises her green eyes to meet mine, looking at me for the first time tonight. In response, I give her the full Berkeley. Designed to win over an arena, he is a lot to take in close quarters, and it’s a little bit mean on my part to hit her with that, but when it comes to Liv, I don’t know what I’m dealing with–she confuses me–and I find safety in keeping my guard up. And I’m glad I do because the impact of her eyes almost knocks him straight out of me, but at the last second, I hold on.

She inhales sharply, and her words come out in a soft, breathy rush, “Thanks, I really wasn’t trying to rummage through your kitchen.”

She looks so scared that hope springs into me and with confidence I walk toward her to the kitchen island and pull out a cutting board, sliding it to her across the counter top as I say, “No problem. Everyone’s getting hungry. I was just going to order a pizza.”

Pulling open a drawer, I busy myself searching for a menu, hoping that I look casual.

“Oh–well, you have the fixings for guacamole in your fridge. I could make some to satisfy everyone in the meantime,” she offers, tacking on more to herself than to me, “not that I was rummaging through your fridge…”

My instinct is to laugh at the absurd offer, but sneaking a glance at her, she looks so appalled the feeling flees and suddenly all I want is to gather her up in my arms and kiss her and tell her it’s okay. And that urge is so shocking to me that I grab on to the first pizza menu I find and pick up the phone and start dialing, saying, “that’d be great!” just so I will stay where I am and do nothing.

I don’t even know what I order.

True to her promise, it turns out I do have the ingredients for guacamole in my fridge–no idea how they got there. My housekeeper? Shar? Haynes? Could have been any of them)–and Liv now stands next to me mashing avocados.

As I hang up the phone, she takes a deep breath, and extends her hand. “I’m Liv, by the way.”

In that instant I know that my instincts were correct about the rabbit. If LA had gotten the best of her, she would have expected me to remember her, brought it up, reminded me that she’s someone worthy of knowing, is part of the scene. But the innocent sincerity in her introduction proves that none of that is a thought and as I’m finally allowed to touch her and I take her hand, I let a small smile spread over my face, relief in the rabbit abounding as I study her, her slim fingers wrapped in mine.

Wanting her to know that I think she’s someone worthy of knowing, even if she doesn’t think so, I simply reply, “I know.”

Her face drops and a soft blush creeps over her cheeks.

This is fun. I’m trying not laugh and I bite down, widening my smile, my eyes never leaving her face, as I take a step closer to her, but not too close. I’m so happy to see her, if I get any closer I’m going to kiss her, and that will freak both of us out. Instead I stick to teasing her and remind her, “and I’m taller than you expected.”

She stiffens and I can see the blood bloom in her face, deepening her blush, and I’m instantly sorry for doing this to her, for unleashing stage Berkeley on her. Again, the real me wants to fix it and hold her and I quickly grab a chip, dip it into the guacamole, and eat it so that I will keep my hands (and my mouth) busy.

I respond genuinely, “mmmm… this is good,” and then stage Berkeley seizes an opportunity and adds, “you know, I think I should come to dinner.”

Liv stares at me in shock. “You want to come to dinner at The Vicente?” she asks, her eyes searching my face, peeling away layers, trying to decide if I’m kidding.

“The Vicente? Sounds exotic,” I laugh, but let her know with my eyes I’m dead serious. “Friday at eight?”

“S-sure,” she stammers. “Do you have any food allergies?”

Again, the look of horror on her face pushes me to the edge and to keep myself in line I pick up the chips and guacamole, grabbing stage Berkeley and dragging him out of the room while he says with a wink, “nope. It’s a date.”

As soon as I’m away from her and around the corner, I come back into myself a bit. Thinking back in shock about what has just transpired, about the strength I don’t possess that is needed to resist her; I know I’m in trouble. My heart is pounding in my stomach and I’ve never felt like this before. Terrified to categorize the emotions rushing through me, all I know is this is not good. Ten minutes alone with her and she completely derailed me; there is no way I’m going to make it through an entire dinner.

Pick up Katie Delahanty’s In Bloom for just 99¢!

I left for LA with everything I owned piled into my old Volkswagen and dreams of becoming a costume designer. Little did I know I’d wind up designing for a lingerie company—yeah, not sure how I landed this gig—and taken under the wing of two young Hollywood insiders. The fashion shows and parties were great, but life really got exciting when the seriously hottest lead singer of my favorite band started to fall for me.

How does someone like me, an ordinary girl from Pittsburgh, wind up in the arms of the world’s sexiest rock star—surrounded by celebrities, fashion, and music—and not be eaten alive? Berkeley is everything I’ve ever dreamed of in a boyfriend, but the paparazzi, the tabloids, the rumors, it’s all getting a bit too crazy. My life has become every girl’s dream come true, if only I don’t blink and lose it all…

Katie never knew she was a writer. Her childhood obsessions centered on old movies, costumes, fashion, playing dress up, and books. Lots of books. On her quest to play make believe for a living she decided she wanted to be a fashion designer and after satisfying her practical parents by graduating from UCLA with a BA in Communication Studies she went on to pursue her design dreams with a Professional Designation in Fashion Design from FIDM. She spent five years helping to design romantic dresses that were sold everywhere from Anthropologie to Nordstrom before the economic downturn led to a career shift and that practical degree came in handy. Now in charge of the ecommerce business for In Bloom Lingerie, she was asked to start the company blog. Not knowing what to say about lingerie but needing to use bridal keywords, she decided to start a fictional serial about how a girl named Olivia Bloom, who worked for In Bloom Lingerie, became engaged. And that is when Katie fell in love with storytelling and the path to make believe became clear. She has not looked back since. Katie lives in Los Angeles with her husband.