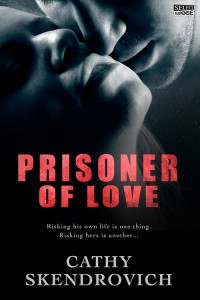 You’re sitting at a red light in your car, rocking out to the latest Jason Derulo hit through your earbuds, when the passenger door of your car (which you never lock) is yanked opened, and a man jumps into the empty seat. He points a gun (or knife) at you and barks “Drive!” What’s your reaction?

This is the premise of my debut novel, Prisoner of Love. I started writing the book about four years ago, when the idea of carjacking a female driver in her car popped into my head. It’s one of my recurring fears; that and being locked in a bathroom stall, which wouldn’t be nearly as frightening.

Once I had that scenario in my brain, I wondered how I could incorporate it into a full-length, romantic suspense novel. My older son gave me the idea. We were driving to a college that he wanted to tour, and we were on a deserted stretch of freeway (as deserted as California freeways can be). We passed a prison work crew cleaning up trash along the side of the road.

I’d been complaining about how I couldn’t come up with a plot to go along with my awesome story starter scene when my son said, “Mom, what if the guy is a prisoner on a road crew?” In that split second the plot for Prisoner of Love was born.

I was involved with an online creative writing site at the time (and still am), so I began uploading the first chapters of Prisoner of Love. Readers loved it. It didn’t matter that I was new to writing romantic suspense, or that many a time I wrote myself into a corner and had to delete, delete, delete. They wanted more of Jake Dalton and Lucy Parker. Before I had finished writing the book readers were telling me to get it published, even that it would make a great movie (I’m getting ahead of myself here just a tad). So I sent it to Entangled Publishing, and the rest is history.

When I signed my contract with Entangled, I had to take the book off the online writing site. It had received over 800,000 hits by January, 2014. I can only imagine how many more hits it would have a year-and-a-half later. But now it’s going out into the big, big world, and I feel like a young mother all over again, sending her child to school for the very first time. Will it make friends? Will people like it? Will it be added to a lot of groups? I’ll find out soon.

Prisoner of Love is a product of my family. I may have written it, but everyone I love was involved in its making. For that reason alone it is a blockbuster. I hope you’ll add it to your Must Read list, and make it a beloved friend.

Learn more about Prisoner of Love

That’s right, it’s time to Indulge, so get your eReaders ready.  Our March Indulgence ti…

Welcome to the second post in my grand European Adventure. For those just joining, I’m a Alex…