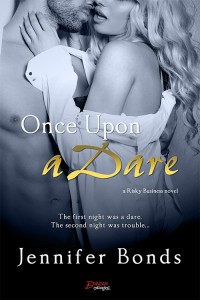 There’s one in every group… The wild one with more pride than sense, and a very special brand of WTF-ery you’ll never forget. You know the type. The one will do anything—and I mean anything— on a dare. We challenge them. We cheer for them. We bail them out of jail. Hell, sometimes we are them.

I’ll never forget the summer I road tripped it to Niagara Falls with my boyfriend (now husband) and a half dozen of our closest friends. We were young, broke, and looking for adventure. And if there’s one thing Niagara Falls has by the pint, err… barrel, it’s adventure. So when the guys suggested we check out the local strip club, Mints, I was all in.

Because, you know, strip club.

I’d never been to one before and it sounded sexy, fun and totally naughty.

Turns out it was a special night and Splash McKenzie, Canada’s newly crowned top amateur stripper, was in the club. Go figure. The place was a madhouse and wouldn’t you know they were looking for guests who wanted to join the ladies up on stage? The guys I was with thought this was the Best. Idea. Ever. Only none of the other women in my group wanted to do it. Me? I wasn’t about to back down from the challenge. Someone threw out the word dare and I was a goner. The gauntlet had been thrown down and I figured if I was going to do it, I was going to do it with flair.

I marched my butt up there and danced my ass off with Splash McKenzie. Thankfully there was no pole work and I got to keep my clothes on. And you know what? I had a blast. She was a sweetheart about the whole thing. Not only did I get a signed poster, but I got my first business card from a creepy little dude who wanted to teach me to eat fire. Because, well, it’s hot. Fortunately, he didn’t dare me to call him, so I was able to finish my college degree and make my parents proud the traditional way.

Ten years, a bout of professionalism, and two wee ones later, my wild streak is one of my best kept secrets. But it makes for good late night storytelling and a few fond memories among friends. Of course, every time my husband points at our daughter and says ‘that’s your kid’ I cringe a little, fearing she really will follow in my footsteps! But I guess there are worse things in life, like living with regret. And you know what? Given the choice, I’ll take that dare every time. Some of my most memorable (and most embarrassing) life experiences are tied to those three little words: I. Dare. You.

What can I say? I’m a sucker for a good dare. And they make for such a fun, sexy set up in a romance novel. In my new release, Once Upon a Dare, Olivia agrees to ditch her ice queen façade for one night and seduce a sexy stranger. The only problem? He’s the new boss.

How about you? What’s the craziest thing YOU’VE ever done on a dare? One, two, three… Go!

Find out more about Once Upon a Dare