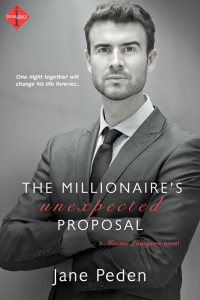 Why do you make things so difficult for yourself? People ask you that like it’s a bad thing. But really, taking the difficult path leads to some of our proudest moments. It’s why we climb mountains. It’s why we run marathons. It’s why we buy the 1,000-piece jigsaw puzzle.

And it’s why my favorite romances are the ones where you just can’t imagine how these two people can possibly end up together . . . but they do.

So when I set out to write my debut contemporary romance, THE MILLIONAIRE LAWYER’S UNEXPECTED PROPOSAL, I tried to put my characters in the most unlikely scenario possible for a happy ending. Camilla and Sam had a fling five years ago in Las Vegas. Sam left abruptly, and Camilla married another man only a week later. A billionaire who she didn’t love. Then she had Sam’s baby. And didn’t tell him. Then her husband died, and suddenly she’s on Sam’s doorstep, demanding that he marry her, to help her keep custody of the son he never knew he had.

Sam was abandoned by his own father, and believes the worst thing a man could ever do is not be there for his child. And now, thanks to Camilla, he’s become his own worst nightmare – an absentee father. And because of his background, Sam is quick to jump to conclusions, and has a really hard time seeing any viewpoint but his own.

But like solving a jigsaw puzzle, once you put all the pieces together in the right place, you can see a whole different picture. That’s what writing a book is like for me – finding all those scattered pieces and putting them in the right place. Only then does it become clear why Camilla made the choices she did, and that she and Sam really do belong together.

We make things more difficult for ourselves – and for our characters – because it’s so much more rewarding that way. And it’s just plain fun.

Find out more about THE MILLIONAIRE’S UNEXPECTED PROPOSAL

My name is Jodi Linton, and I write kick-ass, southern contemporary romances. At the moment I’…