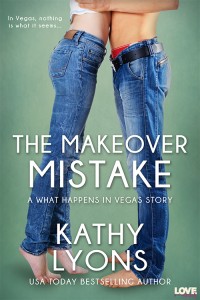 Sometimes an author starts on the wrong foot. I certainly did with the Makeover Mistake. The voice was right, the funny was perfect, and the set up was right there. Except…we never scene the woman in this scene again. So it had to go. But you get to read it right here, right now! And then tell me if I should spin off those two characters…

Chapter 1 — DELETED — From The Makeover Mistake by Kathy Lyons

Find out more about The Makeover Mistake

All for One and One for All!

Behind the Book with Maggie Kelley

We’re thrilled to kick off the blog tour for Deja Voodoo by Elle James today! Be sure to stop …

Merry Christmas everyone! I’m happy to share a recipe with you today that will probably have you cur…