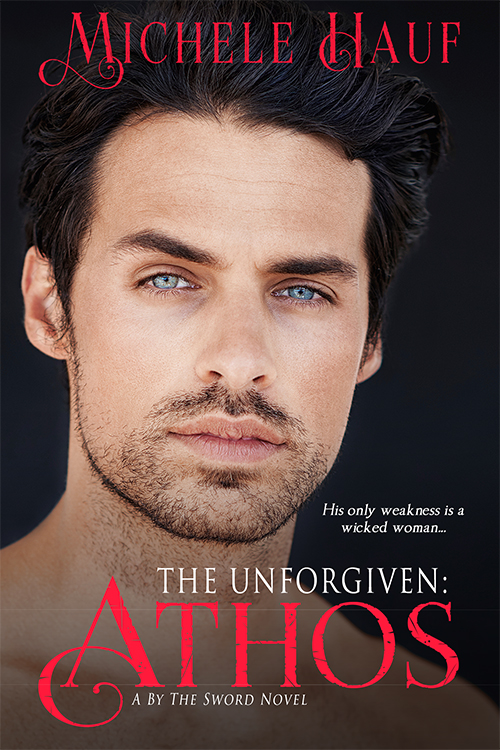 All for one and one for all!

Yep, I’m a little obsessed with musketeers. Alexandre Dumas’ musketeers, to be exact. The three of them. All four of them! It’s not cowboys, fire fighters, doctors, or even sports heroes that do it for me. Give me a swashbuckling musketeer in leather bucket-topped boots and wielding a rapier and musket and I am in heaven. The obsession began in the 1970s. With two movies. I thought I’d go through some of the best movies based on Dumas’ story, The Three Musketeers (in order of my favorite to least favorite). Hopefully I can lure a few of you toward obsession as well. 😉 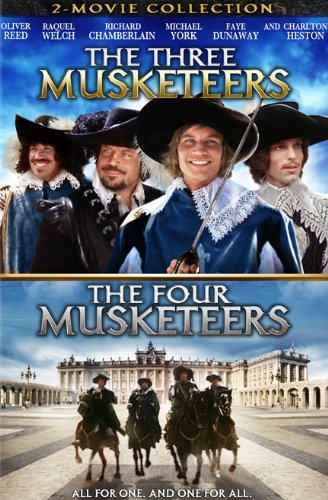 In 1973 and ‘74 Richard Lester put out two movies: The Three Musketeers, and The Four Musketeers. These are my favorite of all the musketeer movies I have seen and I rewatch them regularly. They also follow the book more closely than any other movie. The book is in two parts, so it made sense to make two movies. I love Michael York as the dashing young swordsman D’Artagnan. Raquel Welch has some fun with Constance. But the award goes to Faye Dunaway for her on-the-mark portrayal of the lovely yet deadly Milady. This is also one of few movie that gets Porthos right, making him materialistic and a bit vain, though also he does come off as a bit of a buffoon. Ah well. I highly recommend watching both these movies! 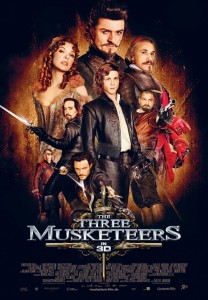 The 2011 version of the movie featuring Logan Lerman as D’Artagnan has a bit of a steampunk-ish flair to it. The Duke of Buckingham flies in on an airship. Uh, weird, but actually cool. I expect various directors to put their own stamp on the story while also adhering to the classic story. By the way, Orlando Bloom as Buckingham? Marvelous. Over-acted, bombastic, and eating all the scenery. I loved every minute of his performance. The musketeer that stands out in this version is Luke Evans’ Aramis. Maybe it’s because I have a crush on Evans? Also, I did like Ray Stevenson’s portrayal of Porthos. 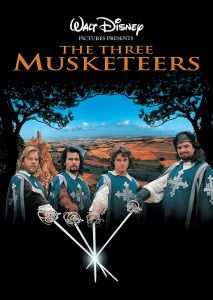 In 1993 Disney put out their version of the story and it was fun, if a little silly. But this story plays well with some silliness. Keifer Sutherland plays Athos, and Charlie Sheen was perfectly cast as Aramis. Rochefort is deliciously realized by the actor Michael Wincott (who is another fav of mine; anyone see him as Top Dollar in The Crow?) 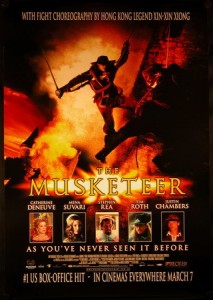 In 2001 the title was simply The Musketeer, and it stared Justin Chambers as D’Artagnan. Is he still on Grey’s Anatomy? Have watched that show for years. This was my least favorite of the movie versions simply because it didn’t have a lot of focus on the 3 main musketeers. I did like Tim Roth’s version of D’Artagnan’s nemesis (though he wasn’t called Rochefort but Febre). If you’re going to pick one movie to watch, set this one aside and go for one listed above.

I know some will raise your hands and ask what about the movies made pre 1970s? I haven’t seen those, but I’m sure there’s some great stuff to be watched. 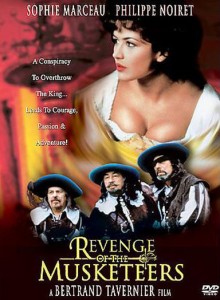 If you like to watch French movies, check out La Fille de D’Artagnan (Revenge of the Musketeers). It features D’Artagnan’s daughter and the musketeers are about 20 years older than in the original story. It’s slow but a good watch, especially to hear the dialogue in French (as it should be!) 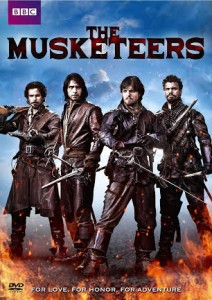 Now, last but certainly not least, is the BBC’s series that is currently playing, The Musketeers. (I think it plays on Friday nights on BBCAmerica, but I get it at iTunes.) In fact, I’d probably slot this one at top right now. It is a must see if you love a good, swashbuckling tale filled with adventure, intrigue and romance. It deviates from the original story. A lot. But each of the four musketeers does stay pretty close to Dumas’ characterizations. I wish Aramis struggled a bit more between religion and lust. Porthos could have a better fashion sense. But Athos is spot-on. And D’Artagnan is as well. Of course, if you know the story, many main characters do not make it to the end. But to have a successful TV series last longer than one season, well, let’s just say some characters were given a renewed lease on life. And it works well, even though I have occasion to grumble “That can’t possibly happen because that’s not the way the book was!” It’s okay. I’ll survive. Because I do enjoy this series. The costumes alone make it well worth the watch. All that leather, and those rapiers and muskets. Athos and his world-weary eyes peering out from under a perfectly tilted hat. Aramis’s dashing smile. Porthos has the ability to use anything as a weapon—a fork! And D’Artagnan, the ambitious new soldier with a heart of gold who still has a lot to learn about love and life.

So which of these versions have you seen? What about some of the older movies? Can you recommend one to me? Who is your favorite musketeer?

My favorite? Athos! The wise and world-weary musketeer who is forever haunted by the memory of a wicked woman. I must say, I really love what the TV series is doing with Athos and Milady. Tom Burke plays Athos perfectly. He and Milady are a must-see relationship to watch.

Now, if you love the musketeers like I do, you won’t be surprised that I was compelled to write my own version of the Inseparable Four. THE UNFORGIVEN: ATHOS is about, well…you guessed it! I’ve been very careful to use Dumas’ characters as he designed them, but also to add touches of the real person that character was based on. Athos was based on a real nobleman, Arnaud de Sillegue d’Athos, who was also a musketeer. I pick up the story 7 years after the famous threesome first dashed across the pages, and fit it neatly between those first stories and the next, Twenty Years After. Did you know Athos was a father? That Milady had a son? I’ve fit a few surprises into my story that I think you will enjoy! 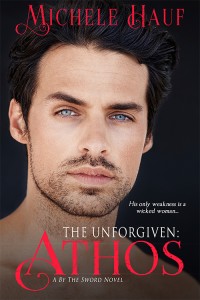 Find out more about The Unforgiven: Athos

The Top 5 reasons I could never live on a Ranch

Behind the Book with Kathy Lyons ~ Deleted Scene

Everything’s just a whole lot easier when it’s closer to home, right? Catching a movie at your local…

Top 5 Christmas Songs that Get you in the Yuletide Mood.   “Last Christmas” by Wh…