Bowen vs Drake
Round 3 Match 2

Thank you to The Literary Gossip & Talking Books for their continued support of these two fine men!
Vote via rafflecopter below 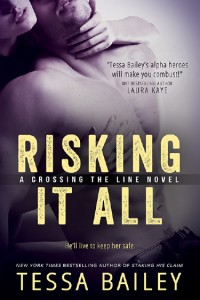 My name is Tessa Bailey and I’m in Bowen’s corner of the boxing ring, ready to duke it out. Here is a scene from RISKING IT ALL when Seraphina and Bowen share their first kiss.

Her kidnapper still held her hand tightly, but had stooped down to scoop up a pebble off the ground. As she watched in stunned silence, he lobbed the pebble up at the closest window of the building on the other side of the alley.

“What are you doing?”

He held up a finger, smiling when a light illuminated the window. “Wait for it,” he drew out.

When the window flew open on a barked curse, his hand squeezed hers, pulling her closer to his side. Sera stumbled into the crook of his arm, the smell of whiskey and smoke wrapping itself around her like fog. Above them, a white-haired woman in a housecoat appeared at the window, squinting into the darkness and looking less than thrilled by the disturbance. “Mrs. Petricelli, you’re looking extra beautiful this evening,” her kidnapper shouted. “Sing for us, would ya?”

He slapped his free hand to his chest. “My undying love isn’t enough payment?” Sera blinked in surprise when the woman began to primp, patting the back of her hair. Her former irritation over the kidnapping turned to intrigue. She couldn’t stop herself from looking up at him, wondering how this playful man had put the fear of God into three men twice his age only moments ago. When she’d gotten her first look at him at the bar, she’d judged him to be older, thanks to the weariness in his eyes. Now, with a roguish grin playing around his mouth, a twinkle replacing the fatigue in his eyes, she changed her earlier assumption. He couldn’t be older than thirty.

Her assessment was interrupted when the most beautiful sound she’d ever heard floated through the alley and arrested her on the spot. Mrs. Petricelli leaned partially out the window, singing an opera song that Sera recognized as Puccini. She wasn’t shy with it, either.With wobbly arms outstretched toward the night sky, her voice rose and fell in such haunting perfection that Sera temporarily stopped breathing. One by one, windows in the building began to slide open, neighbors popping out to listen, joy written on their faces. Having lived in the area for even a short while, she knew that quiet respect was rare among the residents, making their utter silence almost as poignant as Mrs. Petricelli’s song. She didn’t want the moment to end. Never in her life had she experienced something so spontaneous and wonderful. In all the hours she’d spent in church, listening to choirs sing, nothing she’d ever heard could compare to this. How ironic that it was taking place in a Brooklyn alley that smelled like stale garbage, with a man who had managed to infuriate and attract her within minutes of their acquaintance.

Sera glanced up at him. Instead of watching Mrs. Petricelli, he watched her, as if she were the main attraction. “You’re smiling.”

Her fingers flew up to trace her mouth. She was smiling.“Uh oh.”

She couldn’t move as he angled his body toward hers, pulling her into the circle of his arms. In that moment, she forgot about her job. About being undercover or the fact that this man was an enigma that needed solving.With opera gilding the cool air around them, the masculine lips descending toward hers became her whole universe. She wanted him to kiss her. Badly. Even suspected it might be the kind of kiss she’d always dreamed of but no one had ever delivered.

The song ended on an abrupt note, breaking the spell. Sera jerked away from him. What is wrong with me? Letting him kiss her would be a mistake. Of that she was positive. “Thank you,” she called up to Mrs. Petricelli, before racing back toward the kitchen as quickly as her legs could carry her. The door didn’t slam behind her as fast as it should have, telling her she’d been followed. Breath raced in and out of her lungs as she entered the hallway. Just a little farther and she’d be away from him.

A hand curled around her elbow just as she reached the dining room. “Welching on deals in this neighborhood can get you into trouble, Ladybug.” He turned her around, bringing her up hard against his muscular chest.“You’d do well to remember that.”

She couldn’t help it. Her gaze fell to his mouth. “Kissing you seems like worse trouble.”

“Yeah, but it’s the fun kind.” He glided his hand up the back of her neck, gathering her hair into his fingers. Such a proprietary gesture, it gave her pause, feeling a flood of tantalizing heat rush though her system. His eyes flared at whatever he saw taking place on her face and he didn’t waste time taking advantage. Cursing once under his breath, he yanked her up against him and fused their mouths together. Ohhh. Oh, wow. Sera’s body melted along with her reservations, curves conforming to his hard planes in an effort to get closer. Because of their height difference, her head had fallen back to receive the aggressive kiss, but as his tongue skated across her lips, parting them, she pushed up on her toes and engaged him enthusiastically.

A guttural groan met her action, the hand in her hair tightening as he backed her against the hallway wall. She needed to breathe, but he seemed unwilling to let her do so. Worked for her. Breathing would give her time to think, and even a tiny flash of clarity could talk her out of this and it felt so good. His tongue worked deep inside her mouth, claiming her, leaving no room for protest. Then, oh then, his hips fit to hers and began mimicking the rhythm of his tongue. Slow, measured grinds that were somehow a little frantic at the same time. A thrum built between her legs, becoming unbearable.

When she whimpered, he bent his knees and came up more firmly between her thighs, plastering every inch of them together. Finally, as dizziness set in, his lips left hers.“Jesus,” he grated at her lips. “I said a kiss. You’re begging to be f*****.”

His words barely penetrated the desire still blanketing her mind. Quick rushes of breath seemed to be amplified in her ears as she drew them. “I…I am?”

He searched her eyes for a moment, his regard so intense she nearly missed the hardness pressed against her belly. But once she felt…it…nothing could prevent her face from heating, reddening. Bowen’s gaze fell to her flushed skin and he released a tortured laugh. “Ah, sweetheart, I don’t f*** around with virgins.”

Not bad, eh? Vote for Brooklyn bad boy, Bowen Driscol. He won’t let you be sorry 🙂 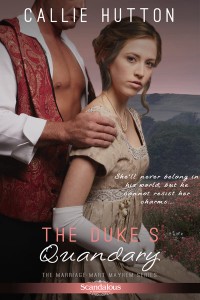 Hi, my name is Callie Hutton, and I write a Regency series called the Marriage Mart Mayhem series. Drake, the Duke of Manchester appears in The Duke’s Quandary, the 2nd book in the set. In this scene Drake is chastising his mother’s house Penelope, for allowing herself to be caught in a dark garden with a rake (who Drake had to rescue her from and threaten the man).

“Here, let me.” He strode up to her, and took the spectacles off, smoothing her hair back before replacing the glasses. “You have such soft skin.” He stroked his thumb down her cheek, over the angles of her cheekbone, and then lightly cupped her chin.

She stared at him, her thick eyelashes slowly closing as he continued his caress. She licked her lips, a definite hitch in her breathing. Before he could consider the consequences, he lowered his head and moved his mouth over hers, devouring its softness. The very air around them seemed electrified and her innocent response to his embrace spurred him further.

Drake’s other hand moved up until he was cupping her face, both of his thumbs grazing her velvety skin as he angled to get a better taste of her sweetness. A shudder passed through her, and she leaned in farther, resting her delicate palms on his chest. Drake’s arm wrapped around her waist, tugging her even closer.

Penelope’s acceptance of his kiss stoked a gently burning fire into a raging inferno. He broke from her lips and kissed her jaw, her neck, and then the soft skin at the back of her ear. She turned her head aside, giving him greater access to the smooth, flower-scented skin.

“Drake, are you still speaking with Penelope?” His mother’s voice broke into his drugged brain, reminding him he was standing in the middle of the library, attempting to ravish his mother’s houseguest.

They broke apart, both of them breathing heavily as the door to the library moved open, and the duchess entered. “Oh, there you are. I wanted to ask . . . ” Her voice faded as she took in the scene before her.

“Yes, Mother, what is it?” The abruptness of his statement and raspy tenor of his voice disturbed him. He moved to his desk, and shuffled the papers there, desperate to get himself under control. What the devil would his mother make of this? She certainly was astute enough to guess what had been happening as she entered.

“If you will excuse me, Your Graces, I’ll head to bed.” Penelope grasped the sides of her skirts and hurried past the duchess, who kept glancing back and forth between the two of them, a slight smile twitching her lips.

Drake needs a duchess, and is trying desperately to find the ‘perfect’ woman to make an offer to this Season. However, his very ‘unperfect’ house guest is getting in the way. As much as he finds fault with her, he cannot seem to keep his hands off the shy, bespectacled botanist with a warm heart.

Behind the Book with Jenny Holiday

The Top 5 reasons I could never live on a Ranch

Happy New Year! The editors at Entangled Publishing are always looking for the next breakout hit. Co…

Kick the new year off with two new sweet reads from Bliss! On sale now.   Follow the tour and e…