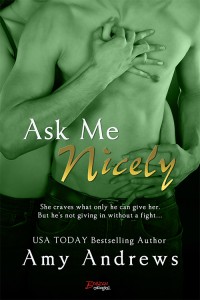 I hadn’t planned on writing Sal’s book. I hadn’t planned for Sal being anything other than a secondary character in No More Mr Nice Guy. Josie’s assertive best friend. Mack’s bossy little sister. But I had to give her a little backstory, right? Just so readers understood why she was the way she was.

So, of course, she grew. And grew some more. Both within the story and on me.

She was definitely a hit with my editor who said, I am getting Sal’s story, right? And then reviewers and readers started asking for her and I knew Sal and I had a date with destiny. A date with her HEA.

She was happy to coast along as she was. She’d had her chance at love. At the one. And lost. And she was not going to risk her heart again. Not when she was fine and dandy and functional again.

Sal was just too damn stubborn all round.

So I needed a man to break through all that. A man that wasn’t going to let her run roughshod over him. A man who was just as obstinate. Just as determined. Someone who wouldn’t let her have it all her own way and was prepared to put up with her crap because he knew she was worth the fight.

A man who didn’t scare easily.

Enter Doyle Jackson – a long, lean streak of sex-on-a-stick who knew how to give her exactly what she needed not just what she wanted.

Once I had Doyle the book practically wrote itself! With Sal kicking and screaming all the way….

Find out more about Ask Me Nicely

Behind the Book with Angela Claire

Did you know there are islands in Toronto? You almost certainly did not. I didn’t before I moved her…