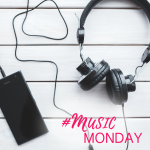 In my recent novel It had to be You my hero James is a player with a secret heart of gold. While I wrote his perspective, I became obsessed with music from Chance the Rapper, Childish Gambino (also known as Donald Glover), and Matty Healy from the 1975.

Angels, by Chance the Rapper, channels the emotion of optimism in a way that’s hard to explain. It sounds cheesy, but it’s so true. Check it out.

Childish Gambino’s Telegraph Ave (“Oakland” by Lloyd) reminds me of how James plays football. He’s the star, and plays the field like a pro. In this song, Childish Gambino does it all, killing it with his rap and the vibe.

She’s American from The 1975 nails James’ boredom with the types of girls he used to date. Matt Healy also pulls this tune off in such a playful and contagious manner, which is so James.

These artists create music that defies genres. They surprise their listener with every song yet the listener can always feel the emotional weight of the song. You’ll find James operates on this exact level through the book.

Of course, I couldn’t just listen to those hree artists to form James’ persona. There’s got to be a little Michael Jackson in there too. Don’y Stop ‘Til You Get Enough is my inspiration between James love for pulling pranks and his persistence in doing so (okay, and history of persistence with girls too).

If any of those songs hit you the right way, add the below playlist to your Spotify account in this exact order (trust me on this one, you’ll want it in that order.) Play and enjoy!

James Parson’s playlist from It had to be You

Check out It Had To Be You by Lizzy Charles, out now! 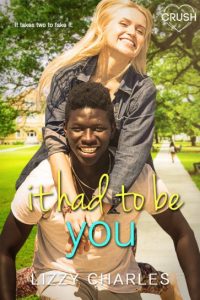 James Parson has a problem. His military dad is going to yank him out of his expensive boarding school if James doesn’t prove he’s no longer hooking up, pulling pranks, and charming his way out of consequences. What better way to show he’s now responsible than becoming the committed boyfriend of a U.S. diplomat’s daughter?

Level-headed, book-smart Edelweiss may have traveled the world thanks to her dad’s job, but when it comes to friends and boys, she knows exactly nothing. Newly enrolled in boarding school, Edel is now on a mission to learn it all. James says he’ll help her experience the ultimate high school life—if she’ll be his fake girlfriend. And fake is perfect, because he’s exactly the kind of player she’d never date. 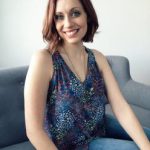 Lizzy Charles writes young adult contemporary romance. She’s a tea fanatic, guacamole expert, and sushi lover. When she’s fixing lunches, dressing kids, or wiping pizza sauce off sticky hands, she escapes to La La Land and imagines all sorts of little love stories. Lizzy loves her daily dose of fitness and is also a RN so she can triage any symptom you send her way. Her best friend from high school is also her husband. Oh and she has a little pup named Professor Lupin who is pretty much the glue to the whole writing operation.

Posted in: Author Interview, Authors Speak Out, FeaturedTagged: It Had To Be You, Lizzy Charles, Music Monday, Teen
Previous

State of Emergency By Cathryn Fox   As you all know, I write romance. It’s my love, but it wasn…