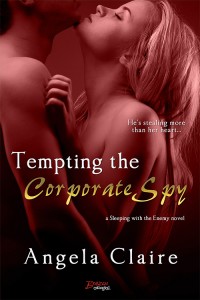 Bad boys, cowboys, pirates…I like them all. But I have to say my favorite romantic hero is the sexy geek. There’s something so sweet and hot about a cute guy with a high I.Q. Call me crazy, but with the sexy geek you’ve got a guy who doesn’t use cologne or spend hours in front of the mirror admiring himself and he’s still hot. Better yet he can fix your computer. Sure, sometimes you have to go the extra mile to get a sexy geek’s attention. I married one. I should know. I could cut my hair so short I’m mistaken for bald and if he’s in the midst of a difficult mathematics calculation, he’s unlikely to notice. (Come to think of it, that one actually has its upsides.) But the great thing about the sexy geek is that when he does focus in on you, he concentrates all that hot energy your way. And believe me, he doesn’t have to be told something twice in the bedroom…learning quickly is part of the package!
The sexy geek never makes you feel stupid, though. By definition he can’t be arrogant about his smarts (or else he’s not really a geek, he’s a jerk). I dated a pre-med student once who told me he was taking a full complement of English classes on top of his science load because English was so ridiculously easy. Hmmmm…not a big hit with an English major like me as you can imagine. The sexy geek is humble (most of the time anyway) and with that big brain of his notices more about you than just your looks (although, being a guy, he of course notices those once he gets around to it). But he lets you know what he loves about you in addition to your looks, which not a lot of guys have much time for.
So I’ve written stories about CEOs and billionaires, but in view of my admiration for sexy geeks I thought it was about time to write one for that kind of hero (though I admit I made him a billionaire for good measure because, well, who doesn’t like that!). Jonathon, the computer genius blackmailed into spying in Tempting the Corporate Spy, is a bit of a loner too and more mature than your average sexy geek. He’s in his thirties by the time the story opens and is a good big brother and a thoughtful guy who’s conflicted about what he has to do even as he falls for the girl he has to do it to. And, needless to say, he’s smoking hot all the while.
So Tempting the Corporate Spy was a labor of love in the name of sexy geeks everywhere. From one who knows how much fun getting their attention can be!

Find out more about Tempting the Corporate Spy

Behind the Book with Amy Andrews

Top 5 Reasons I love writing New Adult romance. It should come as no surprise that I am IN LOVE with…

Every novel has a unique birth. Mine was born as I was working my day job as a TV news reporter in F…