Hi from the Bluegrass State (that would be Kentucky, for the geographically disinclined). I’m Teri Anne Stanley, and I write about love, angst, and nekkid parts. And science geeks and bad guys and good guys and lots of other stuff.
I hope everyone is geared up for a peaceful end to the year. It’s been a wild ride for us–checks in both the gains and loss categories, all of it equaling “Life,” I guess, so it’s all good in the end, right?
And here’s to a great 2015!

Favorite Holiday Song: Holly Jolly Christmas? Um, no. But I love almost all the rest of them!

My favorite thing about the holiday season is getting together with friends and family to play games. We’ve enjoyed Apples to Apples for years, but have recently discovered Cards Against Humanity.
What? It’s totally family-friendly. At least, in my family.
Also, someone gave me Bananagram the other day, and I love it. It’s like scrabble double solitaire. AWESOME!

The thing I don’t like is feeling that I’m supposed to be doing a ton of stuff that I’m not getting done, like Chrismas cards, thank you notes, decorating…shopping. Ugh. The committee in my head is working overtime to let me know what a slacker I am–so they’ll have plenty to tell me to do in the new year, I guess. 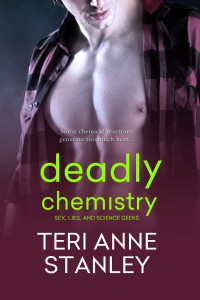 I asked Mike what he’s getting for Lauren this year, and this is what he said, “I’m thinking about a puppy. A dog’s almost an engagement ring, right? I’m saving the ring for Valentine’s Day. Wait, is that stupid? Everyone does Valentine’s Day, don’t they? Maybe I’ll get the ring now and the dog can have the ring hooked to his collar. No, that’s even cornier. Fuck. I don’t know. Maybe I’ll just buy her some pot holders.”
What would the perfect gift your heroine would give your hero and why?

And here’s what Lauren said she’s getting for Mike: “The complete second season of Dr. Who. The first season was pretty enjoyable. Not because we actually watched it, but because of what we did while we weren’t watching it. If you know what I mean.”

Mike was thinking about tying some mistletoe to the chemical safety shower in the hall outside of Lauren’s lab, because they had a quite memorable moment there, but he’s a little nervous about who else might come along and try to smooch on his woman. Or him.
Lauren did manage to put some above the refrigerator door, since Mike spends so much time standing there watching for tasty leftovers to magically appear. He’s been finding something else (or someone) quite tasty there recently…

She focused on the center of Mike’s chest, where his
faded Tuck U T-shirt had a tiny pinhole. “You’re a good guy.”
“Not so much.” His eyes dropped to her mouth, then
back to meet her gaze.
He stared at her. They were standing very close. Well
within each other’s personal space. His dark brown eyes
had little spots of green. And he’d cut himself shaving that
morning, because there was a tiny nick on his jaw, halfway
between his chin and his ear. And his lips were just the
right—something—for his face.
His head had somehow gotten closer to hers. And her
body had somehow gotten closer to his. Just before their
lips met, she could have sworn she heard him sigh, but that
might have been her.
It was a soft, quiet kiss, that much more startling for its
gentleness from this big, rough man. No big clacking together
of positive and negative poles—a simple brush of lips, but
more than that. Something that had been building between
them for two days now, ever since she’d tripped over him on
her way out of the building.
He started to pull back, so Lauren leaned forward,
following him. She pressed her lips to his, more firmly this
time, and touched his lower lip with her tongue. He tasted
like coffee and peppermint. Her hands moved up his arms to
his shoulders, solid under her touch.
He lifted his head from hers then, staring down at her,
his expression as shocked as hers must be.
“I’m sorry,” he said. “I shouldn’t—”
“Why—”
“This isn’t—”
He wasn’t interested in her that way. How embarrassing.

Find out more about DEADLY CHEMISTRY

Under the Mistletoe with Amanda Usen

When I stop to think about it, I truly have been blessed with the support of fa…

Did you know there are islands in Toronto? You almost certainly did not. I didn’t before I moved her…