I’m Karri Thompson, young adult author and soon-to-be new adult author, too. Besides being a writer, I’m a wife, mother, and high-school English teacher. I am obsessed with hard-rock music, Sherlock, Game of Thrones, and The Walking Dead. If I could bring any celebrity back to life, it would be James Dean. Huh, maybe that happened in one of my books. Wink wink. I also live in beautiful San Diego, California, and attend Comic-Con every year. Call me a nerd. I’m okay with it.

My favorite thing about the winter holiday season is having two-weeks of vacation — not because I don’t love teaching and want to be away from my students — but because I get two weeks of full-time writing! And of course, I get to spend more time with my family and friends. In addition, since I live in San Diego, it’s rare that we light up the fireplace, but during the holiday season, I know we’ll do it anyway just for the ambiance. There is also something about this season that is so magical and pure. It’s a time of giving, reflecting upon the year, and doing what we can to help those who may not be as fortunate as ourselves. I try to “pay it forward” as much as I can, especially during this time.

Wow! Is there a least favorite thing? Yeah, for me it’s holiday shopping. Yes, I love giving more than receiving, but when I’m at a crowded mall, I’m reminded that it’s easy to get caught up in the commercialism of the holidays and forget that there are other reasons why this time of year is so special to so many people. I worked in retail for several years while I was in college, and I think that’s another reason why shopping is more of a task for me than a pleasure. I also have trouble finding the perfect gift for everyone on my list, so I’m always shopping at the last minute, which is daunting and stressful. I bow down to all of you “black Friday” shoppers. I couldn’t do it. 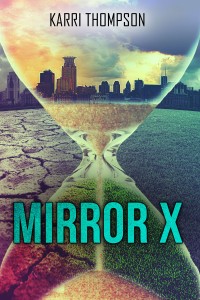 This is a really hard question to answer, since my hero is from the 31st-century and my heroine is from 2025. Cassie longs for the past, so if Michael could give her something from her century, I think that would be the ultimate gift. In fact, it wouldn’t even need to be something tangible. Cassie died before she could attend prom her senior year. If Michael created a prom for her and was her date, that would be fantastic.

This is another hard question due to the century difference, but again, I think the perfect gift would be something intangible. One major thing that the world in MIRROR X lacks is freedom and privacy — something Cassie is used to but Michael isn’t. Cassie would want to give Michael a piece of her world, a glimpse into what it truly means to be independent and living under a democracy. Her gift would include cutting off his band and taking him to a place in Region One that was obscura-free (camera-free). This liberation, if only for an hour, would be her ultimate gift. Yes!!!!

Oh, this is an easy one: in a bot closet – “bot” as in “robot.” In MIRROR X, when a robot needs to be recharged, it goes to a bot closet to plug in. Bot closets lack obscuras (cameras), so this would be the perfect place for the doctor (Michael) to make out with his patient (Cassie).

“No one’s watching us, Cassie. I made this room temporarily free. I meant what I said.” Michael lowered his voice and met my eyes with a gaze so intense I drew away from him and turned toward the window. When he set his hand on my shoulder, I jerked away. “You know how I feel about you. For the sake of the program and for the sake of my own heart, I’ve tried to push those feelings away, but it’s been impossible,” he said, replacing his hands as I crossed my arms.
His grip on my shoulders tightened as he searched my eyes for emotions that matched his own, but before I could severe our gaze, his lips were against mine, hot and hard as his palms slid to my upper arms. My raw anger was eclipsed by my need for comfort and love, my lips parted, and my arms fell loosely to my sides, accepting his kiss.
When his hands shifted to my back, drawing me closer, his kisses filled of desperation. I told myself to stop and push away, but with my next breath, the woodsy smell of his cologne lulled my rage.
You can’t do this Cassie. Stop! Remember what he did. He’s one of them.
“No,” I shouted, pushing away. “Things are different now. I don’t want to be with you. I can’t be with you.”

Find out more about MIRROR X

Under the Mistletoe with D.R. Graham

Under the Mistletoe with Tamara Hughes

Lenny Bradshaw is having a hard time.  Her father went to prison for money laun…