Favorite Holiday Food: Chestnuts! (Although I miss having them on NY street corners.)

I live in Southern California, so my favorite thing about this season is that we actually start getting some colder weather. The few people in my neighborhood who have wood-burning fireplaces make the air smell wonderful and on a cold evening, cooking some soup or having hot cocoa while listening to the wind is so much fun.

In recent years, I’ve become less interested in receiving presents, especially numerous ones. I’d be really happy with a few family dinners and just presents for the little ones.

About Lord of Regrets 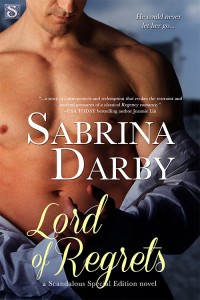 Lord of Regrets begins five years after Natasha ran away from her lover, Marcus. He kept her forgotten perfume bottle by the side of his bed all that time. Although he’s a viscount and heir to an earldom, Marcus started a soap-making factory to gain independence from his grandfather. I think it very likely that one of the earliest gifts he would give Natasha is a soap or fragrance inspired by and dedicated to her.

Marcus is a fairly simple man and as long as he has Natasha’s love, he’s beyond thrilled. So if she gives that to him every day of their lives, he would be fabulously happy.

I think it very likely that Leona, their daughter, would be the one to hang the mistletoe and surprise her parents, and she would probably hang it in every doorway!

She was inviting him in. Again. Despite her best intentions, he was striding past her into her house.
I love you.
The three words still ricocheted in her body. She was foolish. She was vulnerable.
And she wanted to believe.
Natasha tamped down the unbidden yearning, the girlish dreams that she had thought long since relegated to fantasy. Soul mates. He had suggested the idea to her so long ago, seduced her with it, and then she’d forced it away, derided herself for ever entertaining such a thought. Of course, she had been prime for such suggestion. Had she not felt that urgent rush of…something…a push forward from her heart to his? She had been so ready to think it grand,
extraordinary, fated.
Despite the derisive tenor of her thoughts, it was
difficult to completely erase the glow of pleasure she felt at his declaration of love. Chiding herself for that insidious emotion was unsuccessful as well.
“Leona is outside in the garden making snow angels.” She closed the door and turned to follow him into the sitting room. Only––
He hadn’t moved very far and suddenly he was looming over her.
She tilted her head back to look up at him. For a moment, the sensation of falling overwhelmed her. Then the back of her head touched the firm wooden door, and she quickly reached back to assure herself she was still standing, still upright. The pounding of her heart was as foolish as any Gothic heroine’s.
“I’ll willingly take whatever you give me, Tasha,” Marcus said, reaching out. His gloved hand was cool on her neck but as he moved closer, the heat of his body warmed her. “And then,” he was close now, too close, and she knew he would kiss her, “I’ll ask for more.”
At the first touch of his lips, Natasha tasted honey, velvet, chocolate, silk, emeralds, and pearls, all the indulgent luxuries that had always come with his kisses. There was also his scent—his scent and an unfamiliar citrus blend. Yet even that fragrance, too, she was coming to associate with Marcus, with this Marcus, the man who was older, more handsome, more self-assured and relentless. The Marcus who claimed his daughter and claimed to love Natasha herself.
She sighed against him and felt him take that release as surrender. She lost herself in the world between his hand and his mouth, his desire and his will, and it was full of hot, spring colors that had nothing to do with the blustery winter outside the door at her back. He tasted melting, spicy, and she wanted more.

Find out more about Lord of Regrets

Under the Mistletoe with Diana Quincy

This week we are celebrating the heroes of Embrace – the Best Book Boyfriends Ever.     To…