I’m a former television journalist who decided I’d rather make up stories where a happy ending is always guaranteed.
Growing up as a foreign service brat, I was lucky to be able to explore many countries, but I’m now settled in Virginia with my husband and two sons.

When not bent over my laptop or trying to keep up with laundry, I enjoy reading, attending my sons’ games, and spending time with my family. I also dream of traveling much more than my current schedule (and budget) allows.

It’s the one time of year the entire extended family is back together under one roof. My grown nieces and nephews come back from the far-flung cities and states they’ve gone off to and it’s often the only time we’re all together again the way we used to be when they were young. It’s such a blessing to spend time with them as grownups who are now starting their own families. Games and karaoke are sometimes involved and, because we’re a big group, it’s always too noisy!

The meal is also one of my favorite things about the holiday. The foods we serve often reflect our history as a family–from the dirty rice (rice with gizzards and lots of butter and pepper) from my mother’s girlhood in the South, to the apple pie she learned how to make fifty years ago as a young U.S. Foreign Service wife in Laos. And, although we treasure tradition, as the family grows and evolves, the menu does as well. We now have to also accommodate a vegetarian and a vegan at the holiday table.

I’m not a big fan of the hustle and bustle, the crowds at the malls, and the cold weather that comes with the holidays. By the time New Year’s Day rolls around, I am more than ready to take down the tree, put away the decorations, and get back to our normal family routine.

About Engaging the Earl 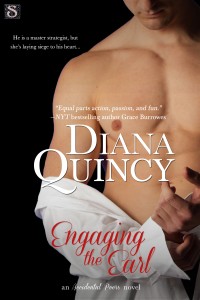 NICE: Rand would compose an original piece of music for Kat to be performed privately on his piano or violin.
Music has special meaning because Rand was a gifted musician who stopped playing music after going to war and experiencing the brutality of the battlefield. Kat anguishes over Rand’s abandonment of his music, but he refuses to discuss it with her.
What would the perfect gift your heroine would give your hero and why?

NICE: Kat would buy Rand a puppy. Her beloved dog, Vera, attaches herself to Rand once he returns from the war and the animal’s presence helps the ex-soldier cope with the nightmares and episodes he suffers from. Kat would give Rand a puppy that would learn from Vera, training to provide companionship and support in the same way the older dog does.

NAUGHTY: Probably anywhere they could be alone for a few minutes so that the stolen kiss could go on and on. Oh, and also so that her fiancé and his (former) mistress won’t catch them being naughty!

NAUGHTY: His meager defenses crumbled. What a poor soldier he was in the battle to save Kitty’s future. “You are everything.”

He pulled her tight into his embrace and buried his face in the fragile turn of her neck, soaking up her sweet scent. She sighed, melting into him when his lips sought hers and found them soft and willing. He kissed her deep, plunging his tongue into the wet cavern of her mouth with the full force of his passion for her.

“Forgive me,” he said softly, trailing kisses down her neck, suddenly desperate for her to accept his apology. He could not offer her a lifetime, but she did deserve this much. “I was wrong to leave and never send word. You are the last person in Christendom I would willingly hurt.”

“I’ll cry off,” she said, breathless. “And then we can be together.”

The words snapped him back to the reality of their situation. He could never marry her. He couldn’t bear it if she were to witness one of his episodes. She’d likely regard him with a combination of pity, fear, and disgust. It was better that she despise him. He released her and pulled back in one abrupt motion. “You misunderstand.”

“But you just apologized—” Her pink cheeks were luminous against her porcelain complexion, the vivid shade of her eyes glittered in the afternoon sun.

“I do regret my treatment of you,” he said stiffly. “However, I don’t intend to marry anyone. Ever.”

Kitty’s delicate brows drew together. “What is wrong with you? Why do you insist on denying what is between us?”

To save you from me. He turned to go, walking out of the garden—and away from her—at a fast clip. “Toby will be looking for us. It is for the best to leave things as they are.”

She hastened beside him, keeping up with his strident pace despite her petite stature and much shorter legs. “In the same way leaving me to go fight your war was for the best? I suppose you believe abandoning your music is also for the best.”

“Things in the past cannot be changed.” He stared straight ahead, not daring to look at her. “It is best we move on.”

Find out more about Engaging the Earl

Under the Mistletoe with Sabrina Darby

Readers have spoken about how much they love Josh Walker from Full Measures by Rebecca Yarros. &nbsp…

A Lot Like Christmas was one of my favorite holiday romances to write. I loved the idea of an unluck…