Hi guys! I hope you’re all enjoying the holiday season. This is one of my favorite times of the year. The food and music, the decorations, the chill in the air… Getting together with friends and family. I love all of it. So, by extension, so do most of my characters. Here’s a few holiday tidbits about me–and a few of them.

The decorations! I’m a Christmas light junkie. I hang them everywhere.

About A Darker Past 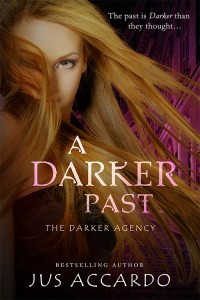 Well, Lukas’ first instinct would be something epically romantic. Classy jewelry or exotic flowers. Because, that’s just how he rolls. But, knowing Jessie as well as he does, he’d know those things would fail to impress. There’s only one thing you get a girl like Jessie Darker–and that’s weaponry. Yes, Lukas would probably get her something pointy and wrap it up in an elegant box with load of ribbon.

Jessie is always teasing Lukas about his (technical) age. I think she’d get him something that might be considered an antique to most people, but sentimental to him. That, or something sharp and pointy 😉

Well, since Lukas is such a gentleman, it would have to be Jessie wielding the mistletoe. And since it’s Jessie, there wouldn’t be anything secret about it. Subtlety is not her strong point. I’m betting that if she could gather enough of the stuff, she’d cover the ceiling in Lukas’ apartment.

“Ahh,” he said, snickering. “So you were jealous.”
“Of course,” I admitted. “Which was obviously ridiculous because, really, who other than me could possibly put up with you? You’re stuffy and old-fashioned, and—”
The rest of my sentence was cut off by Lukas’s kiss. He pulled me close, winding his arms around my waist with a ferocity that sent a tingle down my spine and ignited an explosive fire in my stomach.
I kissed him back, threading my fingers through his hair, the taste of peppermint gum teasing my tongue. This was rare. Lukas was the perfect gentleman. Granted my influence sometimes caused him to cave, but for the most part, I had to be the one to push things. Of course, when I did, and he got going…fireworks.
He backed me up against the pine tree and slipped his hands beneath my coat, fingers knotting into the material of my shirt. The warmth of them was like an inferno that threatened to spin me out of control. Suddenly the frosty January air was aflame.
When we’d first kissed, I’d been terrified to do it wrong. Kissing wasn’t exactly in the pro column of the Jessie Darker skill set. But I’d gotten through it. Lukas was the first guy I’d ever locked lips with, and each time since then, I got a little more courageous. A little bolder.
Lukas made a move to pull away, arms sliding from beneath my coat, but I stopped him by grabbing one of his hands and guiding it down to my butt. Okay. It was more an inelegant shove than what I’d envisioned to be a sexy slide, but the outcome was the same. Lukas’s hand. On my butt.
Oh my God…
This was an entire universe of new territory for me. We’d messed around, but this was different. Dangerous and exciting. He faltered for a second, probably shocked and scandalized, but I’d made a decision, and I was sticking to it. I kissed him again. His reservations melted away, and he was kissing back with even more enthusiasm than before. A small noise escaped his throat. The sound of it made my knees weak. My stomach flutter. A mix between a growl and a moan that was by far the most amazing thing I’d ever heard.
The kiss became desperate, Lukas winding his free hand through my hair. The feeling that came with it—a slight tug accompanied by a subtle sting—did odd things to my stomach. His other hand, still on my backside, gripped hard and pulled at the denim as he deepened the kiss. The sudden severity of it all made me gasp.
He jerked away, freezing.
So there we both stood. In a dark corner of Dobbs Park, out of breath and steaming despite the thirty-something temperature.
Lukas, still breathing raggedly, let his forehead fall against mine. “I’m—that was—I apologize.” His hands, the one tangled in my hair and the other cupping my backside, hadn’t moved.
My own breath, still coming in uneven pulls, puffed out in a plume of white against the chilly air. “That was kind of intense.”
He tilted his head to the side, skimming his lips across my ear and down the line of my jaw. “I know it’s wrong, but I don’t want to stop,” he whispered.
I didn’t either, but truthfully, this wasn’t really the time or place. It was my fault. The whole butt grab thing had been too much. The guy was a hundred-and-fifty-year-old virgin for crap’s sake. There had to be some serious build up in there.

Find out more about A Darker Past

Under the Mistletoe with Christine Glover

‘Tis the season for Split your pants Pavlova with Hayson Manning!   This takes a w…

For the last few months, I’ve been binge-watching Can (pronounced Jon) and Sanem from a Turkish roma…