I’m Samanthe Beck, USA Today bestselling author of sexy Brazens like “Falling for the Enemy.” When not puckering up under the mistletoe, waiting for David Gandy, Gerard Butler and Chris Hemsworth to wander by, ‘cuz…hey, mistletoe…I live in Malibu, California with my husband, (who is fairly confident the Gandy/Butler/Hemsworth mistletoe trifecta is never going to happen), and our 6 year old stuntman-in-training. Add in Bebe, the trash talkin’ Chihuahua, and a furry Ninja named Kitty, and you’ve got the whole chaotic picture.

Favorite Holiday Song: Mariah Carey’s “All I Want for Christmas”

I’ve always been a little freaked out by the Grinch.

About Falling for the Enemy 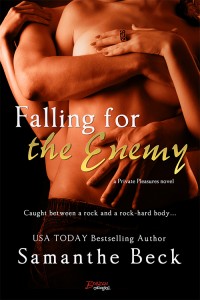 Shaun would give Ginny a blush brush…and it would never go anywhere near her face. 😉

Ginny would give Shaun a shave and a haircut…commemorate their first…um…date?

The restroom at the Gas n’ Go. I can’t say why, because it’s a PG blog, but trust me.

He tangled fingers into her hair, tugged her head back, and recaptured her mouth. Her kiss was as tantalizing and vital as the rest of her, and made him want to taste her everywhere—to consume all the heat and energy she offered. He moved his hand to the back of her neck in some primitive strategy to foreclose any escape route, and deepened the kiss, plunging his tongue into the sweet recess of her mouth with more hunger than finesse. She moaned again and raked her fingernails along his spine, setting off tiny bolts of lightning everywhere she touched.

Uncensored, unsupervised lust tore through him. Desperate to feed it, he sank his teeth into her lip and tightened his grip on her ass. She squirmed against him with such force he suddenly worried it stemmed more from agitation than pleasure.

No apology necessary. She yanked him back and took hard, fast little bites out of his lips while she worked his shirt up his chest. They wrestled his arms free, and then she swept it over his head, dragging some of his hair along with it.

“Sorry…I’m not usually…so grabby, but…”

“I don’t care,” he managed when she ran her lips over his chin. Her fingernail etched a trail across his chest. He knew without looking she traced the gothic script letters tattooed there. The only easy day was yesterday.

Over the last seven months the sentiment had never felt truer, except right here, right now, because falling into Virginia felt easier than breathing—and just as critical. He slid his hand from the back of her neck around to her throat, over her collarbone and down the inviting slope of her chest.

A shiver racked her when he squeezed her breast. Her legs tightened around his hips. “It’s just lately…I’ve been on…this…sex hiatus.”

Him, too, now that he thought about it, but then thought got more difficult because her soft, quick lips scorched a path from his chin to his earlobe, and then she latched on and sucked so hard he almost went lightheaded at the thought of that mouth on his cock, sucking with the same brutal intensity. He shoved her tank top up to her armpits and took a second to appreciate the sight of her pale cleavage swelling above a red, push-up bra. “Sex hiatus?”

“Yeah.” She was on the move again, raining hot little kisses along the side of his neck. “Fun’s fun, but I figured it was time to stop making the same mistakes with the same old guys.”

He reached behind her and unclasped her bra. Her breasts sprang free from their satin and lace restraint. Compact, upswept, with tight, pink nipples pointed straight at him. His mouth watered with anticipation. “Time to make a new mistake, with a new guy?”

She laughed, and the low husky sound pulled his attention back to her face. Her grin slipped a bit off center as she stared at him and smoothed her hand along his cheek. “This is, without a doubt, a huge mistake.”

He didn’t know if she was trying to warn herself off, or him, but it didn’t matter. Good judgment had abandoned him the second he’d walked into her shop, or, in truth, the minute he’d left the house this evening, knowing full well where he’d end up. “Then we better make it count. One night. No apologies. No regrets.”

Find out more about Falling for the Enemy

In honor of the release of Talk British to Me by Robin Bielman, we’ve got a few …