I’m a jeans and t-shirt kind of girl who is addicted to chocolate and goldfish crackers and spent most of my formative years with my nose in a book. I have a B.S. in History, a M.A. in English, and love my romance with a touch of suspenseful mystery. I’m a sucker for historicals and romantic comedies, am not a fan of odd numbers, love technology (though it doesn’t love me) and, despite the jeans and t-shirts, have a serious poofy dress addiction. If it’s got a corset and thirty pounds of gorgeous fabric, I want it! I reside in PA with my husband and two amazing children.

Everything! The gorgeous scenery on the east coast, the decorations, the food, the giving of gifts to my loved ones, the time spent with family and friends, the joy, the music, the atmosphere, the wonder and excitement in my kids’ eyes. I love all of it!

Driving in the snow. I love snow…as long as I’m inside 😉

About Romancing the Rum Runner 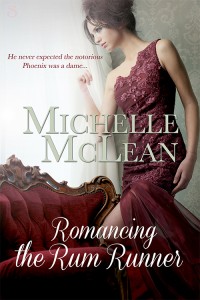 Probably something for her butcher shop. It’s her legacy from her adoptive father and all she has left of him. She grew up in the shop and it’s a very special place to her.

Maybe a recording of her singing. He absolutely loves to hear her sing, especially since it’s not always easy to get her to do it. So a recording that he could listen to whenever he wanted would be perfect.

Jessie runs a speakeasy in the old tunnels beneath her butcher shop. There is a whole maze of secret rooms and passageways down there. Since Tony is an undercover gumshoe trying to catch the Phoenis red-handed, and Jessie (who IS the Phoenix) is hiding her identity and trying to scope out what Tony is really up to, they can’t very well go around professing their feelings for each other. Especially in public. But a nice bunch of mistletoe hung in Jessie’s speakeasy would give them a private place to express a little affection 😉

Jessie laughed and the sound hit Tony right in the heart. Damn, but the woman was doing a number on him. Who was romancing who here?
“Come on, Charlie’s going to be wondering what’s taking us so long.”
She reached up on her tiptoes and planted a kiss on his cheek. She tried to spin away but Tony kept his arm around her and pulled her back into his chest.
“Let him wonder,” he said, his other hand trailing up to cup her face.
She leaned into him and Tony brushed his lips across hers, lightly tasting. She rose on her toes again, deepening the kiss before he had a chance to. He wrapped his arms around her waist and lifted her off the ground, leaning back slightly so the full weight of her body rested against his.
A banging from upstairs announced Charlie’s imminent return and they reluctantly came up for air. Jessie pushed away from him, her hand going quickly to her hair. Then she smiled up at him, grabbed him by the lapels and pulled him down for another quick kiss, letting him go just as Charlie stomped down the stairs.
Tony laughed, wishing he could kick the door closed and finish what she’d seemed very willing to start. Two problems with that idea, though. One, they were in a refrigerator surrounded by meat and there were warmer, and more romantic, locations he’d prefer to be. And two, the ever-helpful Charlie would spoil the mood for sure.
Jessie hefted a box and thrust it into Tony’s hands. He held on, pulling her forward for one last kiss, but she grinned and pushed him away. “Sorry, baby, but this bank’s closed. Now go load the truck.”
She spun away with a wink and Tony chuckled. Hot damn, but he’d love to get her good and alone for longer than five minutes.

Find out more about Romancing the Rum Runner

Hey everyone! We are super excited to announce the hosts and schedule for the SPRING MOON Blog Tour …

“He’s undercover. She’s in over her head.” If you liked Samanthe Beck’…