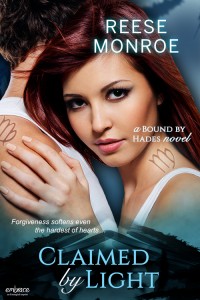 I love all things paranormal, whether it’s vampires, demons, werewolves. There’s just something about getting lost in different worlds where the abnormal…is normal. Maybe it’s because I get enough of the normal on a day-to-day basis. Or it could be the dark, mysterious, and sometimes naughty aspect of those heroes and heroines.

Yes, it would make my toes curl if one of my Shomrei Warriors showed up on my doorstep, fanged out and ready to protect me from anything and everything. 🙂

I wrote a rough draft of Claimed by Light in about a month. During the first two books of the trilogy, Halena, the main character of Claimed by Light, took hold of my heart. She was so cold, calculated, and… bitchy. I knew there was a story behind that, so I dug a little, and boy did I find a tortured soul. My favorite kind of character to write!

Most of my writing happens in my office, with my sweet dog, Maddux, lying nearby. If you follow my Facebook or Twitter accounts, you’ve surely seen pictures of my cuddle buddy. So, with him at my feet, some rocking music streaming through my earphones, I’m set to write for hours on end. 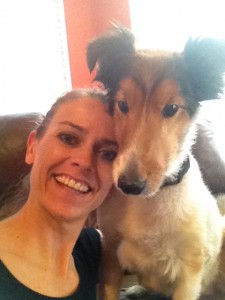 Here’s a look at some of the songs I had playing while writing Claimed by Light:

Get Your Copy of Claimed by Light

1 Reply on Behind the Book with Reese Monroe

I love watching classical period pieces. They soothe my soul and fill it with warm sweet feelings :)…

Who doesn’t love a sexy geek? Take a peek inside of The Fix Up by Tawna Fenske, on sale…

Ryan Brincatt, the male protagonist in my latest novel, MAYBE SOMEONE LIKE YOU, is a kickboxi…