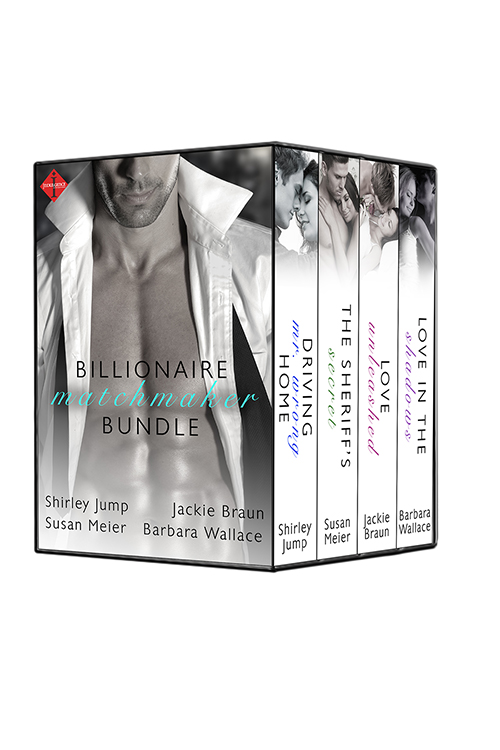 It isn’t often that Shirley Jump, Barbara Wallace, Jackie Braun and I have wiggle room in our schedules. Still, when we came up with the idea for THE BILLIONAIRE’S MATCHMAKER, we couldn’t resist writing these stories. A Jack Russell terrier who is a matchmaker? Too cute.

But the stories aren’t all about cuteness. Barbara Wallace’s hero in LOVE IN THE SHADOWS, is a tycoon with physical and emotional scars. Jackie Braun’s hero and heroine in LOVE UNLEASHED had already tried a relationship once…wouldn’t it be asking for heartbreak to rekindle something they already knew didn’t work? And Shirley’s heroine Gabby IN DRIVING MR. WRONG HOME has her own secrets and issues.

But saying no isn’t always easy when the sexual attraction that hums between characters is irresistible. Marny, my heroine in THE SHERIFF’S SECRET, simply can’t resist Dell O’Neil. The victim of a bad divorce, she’s been hibernating for years…but Dell wakes her up in a big way. She thinks she can handle a little affair, but there’s nothing little about Sheriff O’Neil. He’s a big guy with a big life and a big secret.

As an introverted writer, I found it easy to write about a hero and heroine who’d rather hide than face a crowd. But how to get these two together? When they’ve both been burned by love?

I love the fact that life can be so weird sometimes. I love odd coincidences. I love fate. But more than anything else, I love it when life uses something so simple (like soup) to make a connection. Marny’s a great cook, so it’s a natural thing for her to offer a pot of soup and some crusty bread for an apology. Dell can’t cook…but he’s a guy. They don’t know how to apologize well. And Sheriff Dell isn’t above “borrowing” somebody else’s idea. Especially since it worked so well when Marny brought soup to him! (And since he has access to his mom’s maid who is happy to make him a pot of soup.)

Life is absurd. Romance should be fun. And sexy. And those are the things that popped into my head when I took all the elements of this hero and heroine and rolled them into a story.

Marny and Dell were two of the most fun characters I’ve ever written. Their story was equal parts of sweet and sexy and their challenges to happily-ever-after were very real. Just like the challenges for the Barb, Jacki and Shirley’s heroes and heroines.

They all needed a little nudge from a wet nose…

Behind the Book with Lea Nolan and His Billion Dollar Baby

If you’re looking for something to do tonight, stop by Facebook for a Brazen event! Tessa Bail…

Howdy, it’s Donna Michaels, and I’m excited to share a little bit about my travels to …

The blog tour for Seducing Cinderella by Gina L. Maxwell started today! Gina will be visiting…