We are so very excited to share with you an amazing deal that’s taking place right now! 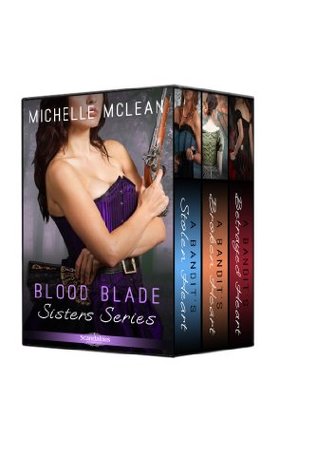 The Wild West just got a little wilder…

In a time when justice is hard to come by, three unconventional sisters become one notorious bandit—The Blood Blade—robbing from the corrupt lawmen to give back to the innocent.

Under the persona of the bandit, Blood Blade, Cilla Richardson robs from the corrupt and gives to the poor. But an accidental kidnapping leaves her with a very handsome captive named Leo Forrester…and an idea to save her town.

Determined to make a fresh start with her daughter, widow Brynne Richardson gives up her bandit activities and leaves California for Boston. Working for a handsome doctor fulfills her need to be useful and independent, but he creates another yearning she can’t deny. But will he understand when she has to resurrect the Blood Blade?

Lucy Richardson’s bandit sisters may have taught her to sling a gun and pick a stubborn lock, but nothing prepared her for the agony of her first heartbreak. Her sisters taught her to fight like hell for what she wants… and she wants Finn.

Top 5 songs on my How To Seduce A Bad Boy Playlist:   Since Mel’s a bit mo…