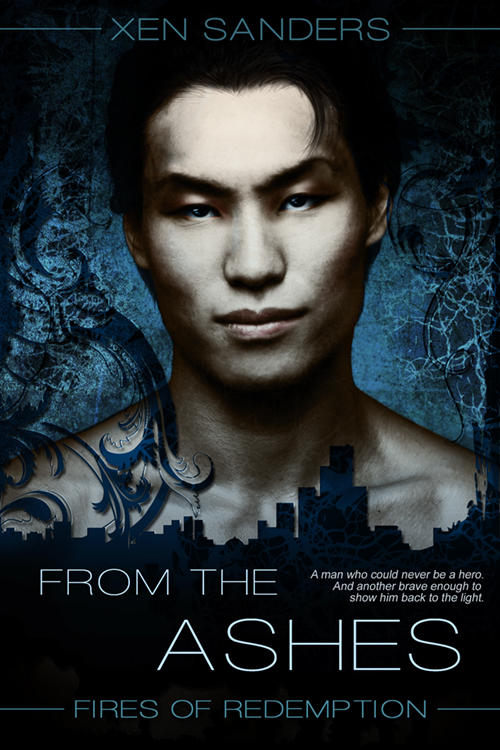 Take a peek inside From the Ashes by Xen Sanders!

The water’s reflective surface throws my thoughts back at me with a dark gloss. Its damp, rhythmic splashes laugh at me. I want to break it, but it would be futile. Force has no effect on water. Push it away, and it only flows to fill a new place. Fate is like water: inexorable, unstoppable, sometimes calm, sometimes turbulent, always inescapable. Push your fate away, and it flows to fill the spaces around you until you’re surrounded.

Sean is still looking at me, quiet expectation without demand. I sigh and force myself to speak, to answer that human need for something to fill the silence. “Sometimes it feels like it’ll always be just us,” I murmur. “He’s already planned my whole future for me. I suppose one day I’ll take his place, and turn into him. With Langdon dead, I doubt I’ll get another position in the lab. No doctorate. Which means home to Dad. Back to the place he’s made for me.”

“You don’t sound very happy about that.”

I smile. It hurts my face, like it was carved into my flesh.

“Who wouldn’t be happy about having an empire handed to them?”

“Someone who wants to be his own man.” His hand is still on my arm, as if it belongs there. “You’re an adult. Your life is your own, not his. Shape it how you please.”

“And if I don’t have that choice?”

“Tobias.” He draws on my arm, urging me to face him. “We all have that choice.”

I tell myself I do it to silence him. This is too personal, too invasive. His questions stray too close to the weakness at the heart of me, and I can’t stand any more. Yet in truth, I do it because I want to; I’ve wanted to since the first taste of his laughter, since I felt his body clasped between my thighs.

About From the Ashes:

Monster, devoid of morals, incapable of human emotion. The villain known as Spark has been called this and more, and as a super-powered aberrant has masterminded countless crimes to build his father’s inhuman empire. Yet to professor Sean Archer, this fearsome creature is only Tobias Rutherford–antisocial graduate researcher, quiet underachiever, and a fascinating puzzle Sean is determined to solve.

But one kiss leads to an entanglement that challenges everything Tobias knows about himself, aberrants, and his own capacity to love. When his father orders him to assassinate a senator, one misstep unravels a knot of political intrigue that places the fate of humans and aberrants alike in Tobias’s hands. As danger mounts and bodies pile higher, will Tobias succumb to his dark nature and sacrifice Sean–or will he defy his father and rise from the ashes to become a hero in a world of villains?

Hi. I’m Xen. Cole. Whatever you want to call me; both are true, and both are lies. My pen names are multitudes, my nicknames legion. Tall, bi/queer, introverted, author, and of a brown-ish persuasion made up of various flavors of Black, Asian, and Native American. I’m cuter than Hello Kitty, more bitter than the blackest coffee, and able to trip over cats in a single half-asleep lurch; I’m what happens when a Broody Antihero and a Manic Pixie Dream Boy fight to the death, and someone builds a person from the scraps left behind. Beardless, I look like the uke in every yaoi manga in existence; bearded or not, I sound like Barry White. About half my time is spent as a corporate writer, and the other half riding a train of WTFery that sometimes results in a finished book. Romance, erotica, sci-fi, horror, paranormal; LGBTQIA and cishet; diverse settings and diverse characters from a diverse author.

Entangled’s Teen. They’re not just for the young, they’re for anyone young at hear…

It’s the most wonderful time of the year… We are getting into the holiday spirit! Meet s…