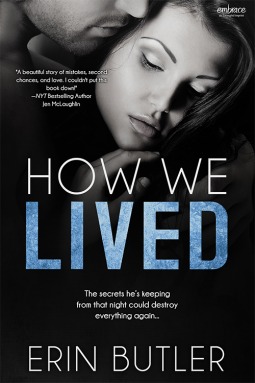 How We Lived by Erin Butler

Nineteen-year-old Kelsey Larkin’s parents uninvited her to her brother’s funeral. She just wanted to wear jeans and a T-shirt—the clothes Kyle would’ve wanted her in—not wrap herself up in death. So she watched the funeral from afar, like an outsider. Which is just how she feels. Chase came, though, just like she knew he would. Until a few months ago, the three of them had been best friends, and then Chase made a mistake that shattered both families. But when Kelsey looks at him, she doesn’t see her brother’s killer. She sees the boy next door who’s always taken care of her. She sees home.

When Chase tells her his feelings run deeper than friendship, she can’t help but get lost in him. In Chase, she finally has the closure she’s been unable to find anywhere else. But the boy she’s falling in love with is still hiding secrets about the night Kyle died. Secrets that could destroy everything they have…again.

We’re celebrating Fantasy Friday with some not to be missed fantasy reads. So settle in…

The blog tour for Flirting to Win by Natalie Anderson has officially kicked off!  Natalie will be vi…