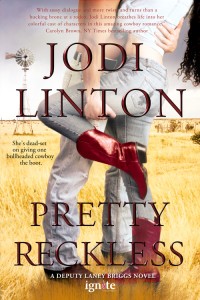 I can almost hear people asking it.  Heck. I ask myself the same question all the time.  How does a stay-at-home mother of two toddlers with no writing background and no social media pages sell a six-book deal to Entangled Publishing?

Unlike most writers, I never really dreamed of being a writer. My biggest dreams, well, I’d already accomplished those.  I was a mother of two very beautiful kids, and I was married to a wonderful man. To say I grew up with small town dreams, well, that’s pretty much the truth.

After receiving a B.A. in History and English, my husband moved the two of us to the big city of Austin, leaving behind the small town life we’d always known.  There he began his teaching career, and I began the long, unproductive job search of a recent college graduate with a liberal arts degree.  In the end, I wound up working for a temp agency doing various secretarial jobs.  It was everything I could have dreamed of (cue massive eye-roll to emphasize sarcasm).   Immediately, I began to look into becoming an elementary teacher. Well, that didn’t work out. So I moved on, got pregnant with my first child and quit working.  After a few years as a stay- at- home mom, I had moved to the suburbs, had my second child, and joined a mom’s club.  It wasn’t exciting or anything like that, but I was happy with my life.

Everything was going peachy until we hit a snag.  The problem was that a teacher’s salary doesn’t really go all that far on a family of four.  So, there I was again trying to figure out what I wanted to do with my life.  And the winner…Dental Assistant School!  It seemed logical at the time; although, once I got into the classes I hated it.  It was during this time that I started to write.  I would write at the park during my lunch breaks, and I would write at night after the kids were in bed.   That was about the time I started to dream of becoming a writer.

The true inspiration for Laney Briggs came about whenever we’d go home to see family in Wichita Falls. My husband and I would check out road signs that would make great names for characters and places.  The drive was over six hours, so we suffered no shortage of signs along the way.  By then I had ditched the whole dental assistant thing (at my husband’s encouragement).  I knew I was writing a book about Texas, and I wanted everything from the setting to the character names to have a Texas ring and authenticity to them.  I knew I had something special on my hands, and I was bound and determined to do something with it.

Out on those old country back roads of Texas, in that distance between Austin and Wichita Falls, I found Laney Briggs and Gunner Wilson, Luke Wagner and the whole Pistol Rock gang.

More so, on those long drives across Texas, I finally found myself.

Read an excerpt from Pretty Reckless

Who is this dark mysterious man?  Find out on Virginia Kelly’s blog tour–where he’…

It’s Romance Awareness Month and we’re dishing all month long about everything romance related. Have…