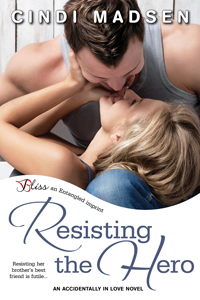 I’ve always had stories in my head, but it wasn’t until after I’d had my first baby that I thought about writing them down. Once I started, I loved everything about writing, although I had no idea what I was doing. But I had a book, so I read up on the publishing process and submitted it to several agents and got all rejections. So I put that book aside and wrote another story. I pretty much repeated that cycle for a couple of years: write, query, get rejected.

As I was deciding whether to keep devoting so much time to something I wasn’t getting paid for, I asked myself if I wanted to keep writing as a hobby or if I was going to look at it as a career. (I knew I could never quit completely. I loved it too much.) Part of me wanted to stop submitting—it’s a rough process, putting yourself out there and being told you’re not good enough. But then I’d write another story and I’d think, this is it! The story people will want! (Spoiler alert, they didn’t.) But I started getting feedback from the people I submitted to instead of just a form reject or silence. I was told that the ideas behind my stories were good, but my writing needed to be stronger. I felt like I’d gotten as far as I could on my own, so I got online to try to find a critique group and ended up at Pikes Peak Writers, a local writers’ group website. Until then, I didn’t even know there were writers’ groups. The first event I went to, I met other writers and several of us formed a critique group. It was hard to have my work critiqued. I wanted to quit a couple of times, but was just stubborn enough to stick it out, and I’m glad I did. I saw my level of writing go way up. I could see what I’d done wrong in the past. So I sent out another round of queries, and along with rejection letters, I’d get a couple of requests to see more material. It still stung when I’d get yet another rejection, but I knew I was almost there. Some of the people who rejected me even asked me to resubmit if I revised. I saw the glimmer of hope that this could be my career and that made me want it more.

One day, I heard about Entangled Publishing. I went to their website, bought one of their YA novels and devoured it. I put together my query letter for what is now All the Broken Pieces, said a little prayer, and hit send. I wanted it so badly it was hard not to refresh my inbox 300 times a minute. Then I got an email saying they wanted to see the full manuscript. I’d been to that point before, so I tried to not get my hopes too high, but they were. I felt it. Then I got the best email EVER! They wanted my book! After eight years of rejection, someone wanted one of my books! I did a happy dance. I bought shoes. I was welcomed by an awesome supportive team of editors, publicists, and authors. They made the process so much easier and cheered for me along the way. I started thinking about the next step, hoping my editor would want another one of my books.

I’d written an adult romantic comedy called Cinderella Screwed Me Over and asked my editor if she would be interested in taking a look at it. Halfway through reading, she emailed me and said she loved it. Then she told me she was starting the Bliss Line, which was sweet, sassy romance, and she thought I’d be a good fit. I had to pinch myself. Someone actually wanted me to write a book? So I wrote Falling for Her Fiancé. I had a total blast writing it and it released in January, only a month after my YA novel. I had no idea what to expect, but I never expected a friend to tweet me that she’d just gone onto the Barnes and Nobles website to browse and my book was on the bestseller list on the homepage. (Honestly, I thought she might have seen it wrong.) But I clicked over and there it was! I thought of my family and how they’d supported me, believing even when I wasn’t sure I did anymore. Then, almost exactly a year after release, when my third book in the series came out, Falling for Her Fiancé went on sale. It flew up the charts again and this time it hit the USA Today Bestseller List! Total dream-come-true moment! I cried, laughed, and danced around with my family. It was a surreal moment, and I still marvel that I get to do something I love for a living. So I can’t help but be the person who cheers for people to not give up. To follow their dreams. Because you just never know when they might come true.

Discover all of Cindi Madsen’s books!

A Birthday Everyone Can Celebrate!

Is there such thing as too many cover reveals? We don’t think so! Without further ado, we&#821…