I had a mid-life crisis.

Turning forty is a game-changer for a lot of people—no big news there.  At some point in everyone’s adult life you sit down in that mental easy chair, grab a beer and take a little look around at where you are. Easy enough. But then you start to compare it to where you thought you’d be when you hit that magical age that seemed so far off when you were twenty and didn’t know anything but thought you knew everything.

Now, I never considered getting a pool boy lover (much to the Main Man’s relief), never gave myself a drastic haircut or started wearing clothes that scared the neighbor’s children and embarrassed my own.  I didn’t buy a car that cost the entire yearly budget for a third-world country. Nope.

I looked under my bed.

You see, under my bed I have several boxes stowed that contain photographs, papers and several short stories, unfinished books and journals full of scribbles that I had jotted down over the years. I was a closet writer and always promised myself that “someday” I would tackle writing that whole book and trying to get it published. Someday.

You know all about someday . . . that day when my kids would be grown and I would retire from the evil day job and while my husband and I traveled the globe, I would write that book. But, I couldn’t do it right now. I was too busy, too tied up with kids and husband and life.

I shoved the box under the bed and decided that the mid-life crisis was over. I had laundry to do.

And then I got a phone call. A good friend, Kelly, who’d bravely fought breast cancer for several years had lost this last round. She went down fighting…but she went down and left behind a husband who adored her and four small boys. She was only two years older than me.

It hit me between the eyes.

I wasn’t guaranteed to get a someday.

That scared the crap out of me.

I looked under the bed again.

I pulled those boxes out, dusted off my journals and informed the Main Man that I was going to write that book, submit it and get published.  I wasn’t waiting for a “someday” that I might never get.

And God bless his big heart he shoved me towards the computer and told me that I could do it.

Fast forward 6 months—long months with little sleep. I had a finished book in my hand and I thought it was the bomb diggity. And, to my delight, RWA contest judges thought it was pretty awesome too and I started winning and getting full requests.

And then both books were rejected.

The rejection emails were nice and informative and full of great information. But, it was still a no.

Dejected, I put the books aside and tried to figure out what I would do next. I wrote category romance and the only game in town had just politely told me to go home.

And then I saw a post by my friend Lori Wilde on Facebook. She announced that she was working with Entangled and that they were starting a category romance line and looking for submissions. I jumped on the website, read the guidelines and sent off my query and first three chapters.  I started a new book because I figured it would take a while to hear back.

Twenty four hours later, Lori emailed me and asked to see the full.

I sent it and settled in to wait.

One week later I was checking my email one last time before going to bed. It was 11 pm and the Main Man was already snoozing away because he had an early start the next morning.  The email from Lori was like a ticking time bomb just sitting there and I must have made a sound because the Main Man rolled over and asked me what was wrong. It told him about the email and he said, “Babe. The content of that email isn’t to change the longer you stare at it.”

He was right. I opened it and started crying. Lori wanted to buy  “A Night of Southern Comfort”. The Main Man got out of bed, kissed me and went downstairs. He reappeared in a few moments with a bottle of champagne and two glasses. He toasted me, kissed me again and crawled back into bed.

I crawled in after him several hours later with a huge grin on my face.

That email started a career for me that has been wonderful, hard, scary, fulfilling and exciting. It hasn’t been smooth sailing and I’m working it out as I go but it is a dream that I am thankful for everyday. 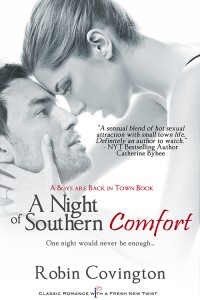 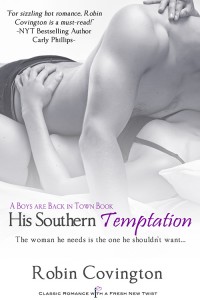 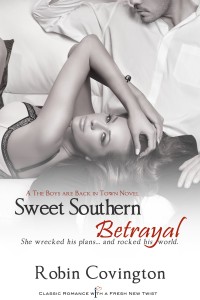 A Tale of Two Centuries is 99 cents today only!

3 Replies on Robin Covington: Behind the Book