I may be a city girl who’s lived in New York for over a decade, but I love hiking, skiing, and anything outdoorsy. So what better way to find inspiration for new books than by grabbing my hiking boots and heading outside?

I got the idea for the Men of Gold Mountain series when my husband and I went hiking in the North Cascades National Park in Washington State. We’d gone to Seattle once before to visit my BFF. We spent a week traveling around the Olympic Peninsula, hiking, swimming, and looking for vampires in Forks, Washington. Which I confess I totally hadn’t known was a real place until we wound up in an Airbnb there! Mind. Blown. 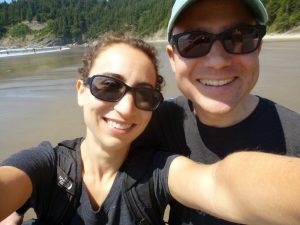 We loved Washington so much, we went back the following summer. This time, we headed east, to the Cascade Mountains. That’s when I fell madly, deeply, head over heels in love. I’ve been hiking all over the world—in the Himalayas, the Andes, the Alps, and even up Mt. Kilimanjaro. But the Mt. Baker ski area in Washington is one of the most spectacular places I’ve ever hiked.

We were surrounded by wildflowers, blue skies, green meadows, glaciers, lakes, and snowy peaks. I loved how rugged the landscape was, and also how accessible. We stayed in a (tiny) ski condo and took our beat up rental car all over those windy gravel roads. We didn’t need a tent, special equipment, or anything fancy to get to some exhilarating views. 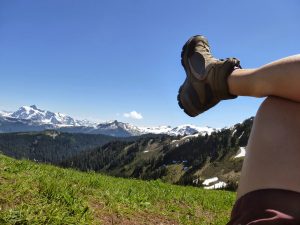 I’d been toying with the idea of a ski novel set in Colorado, but after a week in the Cascades, I knew I had to set my ski novel there and that one book wouldn’t be enough. I had to do a series of four books each set in a different season. With rugged men, adventurous women, and beautiful scenery, I knew I could keep my characters busy year-round.

I can’t believe that what started as a little idea my husband and I tossed around on the trails in Washington is now four very real books I can hold in my hands! The fourth book, Make Me Yours, just released, and it brings autumn in the mountains to life. When bad boy rock star Ryan takes Claire rock climbing for the first time, they’re up on top of a cliff enjoying a sea of orange and red foliage—and enjoying each other.

Because they don’t just go climbing to do something fun. It’s also an emotional journey that involves facing fears (for Claire), sharing intimate history (for Ryan), and—of course—getting down and dirty in the great outdoors.

I’m so glad I wound up in the Cascades so I could dream up the strong, sexy men of Gold Mountain. Time to figure out where to travel next, so I can set a new series there!

Don’t miss Make Me Yours by Rebecca Brooks, out now! 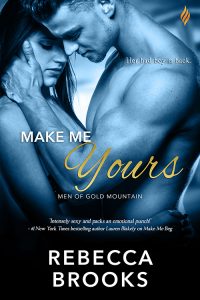 Claire Collins has always been good—except when it comes to bad boys. Or one bad boy in particular: a tattooed musician as skilled with her body as he is with his guitar. But he wasn’t ready to be a father, so she left him to raise their daughter on her own. Only fate had other plans, and suddenly, Ryan is back in her life, disrupting everything. This time, though, she’s determined not to lose her heart…even if she still craves his touch.
Ryan Thomas never expects to see Claire again—especially not in a small mountain town in Washington on the last show of his comeback tour. But when the lights come on, there she is, more beautiful than ever. One incredible night with her won’t be enough… But he’ll have to prove he’s not the man he used to be, if he wants to keep her—and his family—for good. 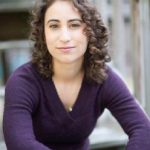 Rebecca Brooks lives in New York City in an apartment filled with books. She received a PhD in English but decided it was more fun to write books than write about them. She has backpacked alone through India and Brazil, traveled by cargo boat down the Amazon River, climbed Mt. Kilimanjaro, explored ice caves in Peru, trekked to the source of the Ganges, and sunbathed in Burma, but she always likes coming home to a cold beer and her hot husband in the Bronx. Her books are about independent women who leave their old lives behind to try something new–and find the passion, excitement and purpose they didn’t know they’d been missing

Happy Weekend! It was a week of Zombie v. Aliens, fashion, flashbacks, Potter and more! Check…

Behind the Book with Bethany Michales I have a confession to make. Even though A Limited Engagement …