An ex-ballerina whose been burned by play boys one too many times, a soldier whose known for being a player but whose fallen for his best friend’s sister via email.  Can he convince her to take a chance on him?

Follow the Falling for her Soldier blog tour for interviews, guest blogs, giveaway and more.

About Falling for her Soldier: 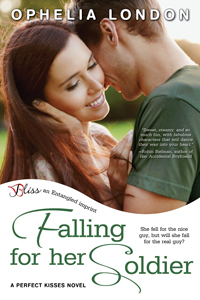 She fell for the nice guy, but will she fall for the real guy?

Ex-ballerina Ellie Bell has twenty-four days left until her self-imposed man-less year is up. No more falling for the wrong kind of guy—charming, sexy, bad. Why can’t she find someone sweet like Charlie Johansson, her soldier pen pal? His e-mails meant the world to her, and she can’t stop thinking about him…until she meets Hunter, whose muscles and cocky smile threaten to have her relapsing.

Before Charlie “Big Game Hunter” Johansson’s last tour of duty, he’d gone through women like crazy. But after connecting on a real, emotional level via letters with his best friend’s sister, Charlie’s ready for a relationship—with Ellie Bell. But then her brother introduces him as Hunter. Proving he’s no longer a player by becoming Ellie’s dance partner for an Army benefit seems like it could convince both siblings he’s changed, but the harder he falls for Ellie, the harder it is to come clean. Can he convince her to fall for the real him before it’s too late?

Calling all contemporary romance lovers! Do you love your romance sexy and your heroes even hotter? …

Join the “How Brazen are you?” Facebook Party. —- The party is starting tom…