‘Twas a fortnight before Christmas, when all through Entangled

Not a novel was forgotten, not a single title;

The Romance Abroad was bundled with care,

In hopes that it would transport the readers somewhere;

The billionaires were all perfectly matched,

No more visions of loved ones dancing out of their grasp;

Lovers were finally united, past and present,

Embracing the Holidays, throughout the worlds and nations.

And even the half-demons found their soul mates in mortals,

Waiting  900 years for a chance at arousal.

When out at the bookstores there arose such a clatter,

We sprang from our desks to see what was the matter:

For YOU, our Beloved Readers.

‘Tis the Season to Kiss Santa

A Baby It’s Cold Outside Novella
by Kate Hardy

‘Tis the Season to Get Lucky

A Baby It’s Cold Outside Novella
by Heidi Rice

Unlucky-in-love PR manager Kate Braithwaite doesn’t think her Christmas could get any suckier. Until a trip into work on Christmas Day leaves her snowbound in the Fifth Avenue department store with her boss’s far-too-tempting playboy son Ryder Sinclair. Ryder’s rugged, reckless and none too pleased to be stuck in a place he hates with an uptight workaholic like Kate—but as the night draws on, the lights go out and the temperature rises, until they’re both wondering is this the season to get lucky?

Tis the Season to be Kissed

A Baby It’s Cold Outside Novella
by Amy Andrews

Tis the Season to be Tempted

A Baby It’s Cold Outside Novella
by Aimee Carter

After the worst year ever, free-spirited Evie Lee rings in the New Year alone, swearing off men forever. So when her brother’s childhood friend, the perfect man with the perfect life, winds up on the same plane home, she’s determined to ignore him. Wes is determined not to take her seriously. Unfortunately a snowstorm traps them at the airport with no way to finish their commute, and his perfect body is tempting her to break her vow—if only for one hot night!

CEO Wes Campbell is famous for always doing the right thing, and running into Evie again is torture. He’s determined to continue his hands-off attitude. But he wasn’t counting on the little hellion’s infectious smile, her killer body, or the vulnerability in her eyes. For the first time in his life, Wes is tempted to do the wrong thing…

Time-traveling PhD student Sydney Dahlquist’s first mission sounded simple enough—spend two weeks in December 1810 collecting blood samples from the sick and wounded of Wellington’s army, then go home to modern-day Seattle and Christmas with her family. But when her time machine breaks, stranding her in the past, she must decide whether to sacrifice herself to protect the timeline or to build a new life—and embrace a new love—two centuries before her time.

Rifle captain Miles Griffin has been fascinated by the tall, beautiful “Mrs. Sydney” from the day he met her caring for wounded soldiers. When he stumbles upon her time travel secret on Christmas Eve, he vows to do whatever it takes to seduce her into making her home in his present—by his side.

In Holiday in Crimson

Westbrook Department Store’s Christmas party wasn’t that wild–but Santa ended up dead and now window designer Shelby Corbin suddenly finds herself the prime suspect in his murder. While CEO Rand McNabb’s romantic attentions both thrill her and frighten her—is Westbrook’s impossibly sexy co-owner really helping Shelby search for the truth about that fatal night? Shelby wonders if Rand has a deadlier motive for courting the only possible witness to the crime…

In Nightmare in Crimson

Last holiday, Pippa McNabb’s faithless husband was found murdered in a Santa suit after a Christmas party. Another year, another Christmas party, and another dead Santa – this time, run down by eight tiny reindeer and a sleigh. And now Pippa is the prime suspect.

Sexy sleigh driver Sky Thornton seems intent on helping her, but is the man who knows too much about her really trying to clear her name, or is he trying to frame her for a murder he committed?

Prominent DC attorney Emma Taylor is pulled away from a promising date the week before Christmas to pick up her ex-fiance from the ER after a bar fight. She’s in no mood to re-open old wounds, but it’s Christmas and she can’t just leave him alone and injured.

Eight hundred eighty-four days. That’s how much time has passed since Major Colton Evans made the biggest mistake of his life. Even after two tours of duty and too much shrapnel in his leg, it’s still the loss of Emma that haunts him. And if he can win her back, he’ll take any chance.

When she insists he stay with her during the holiday, they put out enough sexual electricity to rival the most decorated house on the block. But will it be enough to light the way to a future together?

An Army doctor, Lena Rodriguez has always been too busy with school or the Army for romance. But the letters she received during deployment have captured her heart. Back home for the holidays, she awaits Christmas morning to meet the man who has turned her life upside down.

When Zack Benson watched his best friend’s sister, Lena, leave for Afghanistan, he knew he had to tell her he loved her. So he sent her anonymous love letters. Now that she’s home, he realizes he’s made a tactical error. Lena has fallen for the man in those letters but still thinks of him as a brother. He has to convince her otherwise because if he succeeds, he’ll get the best Christmas present ever. But if he fails, he could lose her for good.

Falling for the CEO

Finance genius Meredith Klaus prefers numbers to people, especially around the holidays. At least the large sum of money that’s mysteriously vanished from the company accounts will distract her from the ghosts of Christmases past. Until her sexy boss asks her to be his last-minute date to a fundraiser gala, that is, and the promise of a special evening calls to something long-buried in her.

Andrew Stanton, Manhattan’s best-known philanthropist, has worked hard building his reputation in the industry. He offers to work closely with Meredith to fix his company’s financial crisis, but the more time they spend together, the harder it becomes to look at her as just a colleague.

A beautiful dress. A handsome man on her arm. A challenge she can’t refuse. Can they find the missing money and fulfill their holiday wishes, or will Meredith be unable to overcome the demons of her past and lose her chance at happiness?

by Christine Bell and Riley Murphy

Leah Latrelle needs a man, fast. To keep her parents from freaking out and moving back to Chicago, she invents a boyfriend who quickly turns into a fiancé. Her plan works until her parents announce they’re visiting for Christmas—tonight. Now Leah has no choice but to come up with the goods. Her friend and business partner Mick is handsome, dependable, and a willing sacrifice. What could go wrong?

‘Tis the season, and Mick Kilpatrick can’t say no to a damsel in distress. Especially when that damsel is a woman he cares about professionally and personally. But being a dad is priority number one, and a sexy woman like Leah will only distract him. He’ll pretend to be her fiancé, but when it’s over, everything will go back to normal. Sure, he’s fantasized about her once or…a million times but that doesn’t mean he’s in love with her. Does it?

Santa to the Rescue

Firefighter Jamey Tucker knows three things in life to be true: an honorable man doesn’t go back on his word; never hurt a woman; and lasting love isn’t a myth. But with his recent move to a new job at Appleton Fire Station, the long hours don’t offer hope of finding the love he’s looking for.

When Jamey meets beautiful pediatric nurse Heather Longhurst after hearing her sing Santa Baby in a supermarket aisle, he offers her a promise he discovers he can’t keep. Heather has been betrayed by men in the past, making it hard for Jamey to gain her trust. Determined to find a way to win her heart, Jamey uses firefighter engine-uity and Heather’s favorite song to prove he’s got Christmas spirit she can believe in all year.

Stranded with a Hero 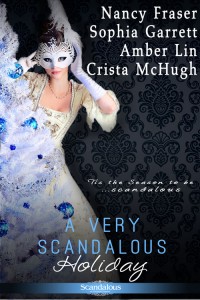 Erin’s Gift by Nancy Fraser
Chicago 1920
Widower, Seth Harrison, has no intention of falling in love again but will he be able to resist the sweetness of his son’s nanny, Erin O’Mara – his sister’s best friend?

An Eternity of You by Sophia Garrett
England 1833
The Duke of Sharrington left Rebecca with more than a broken heart six years ago – he left her with a son. He’s rekindled their passion with his return, but it will take a Christmas miracle to earn her heart.

Letters at Christmas by Amber Lin
England, late Regency
After three years at sea, Captain Hale Prescott has the means to marry the love of his life and his best friend’s sister. Sidony Harbeck, however, might never speak to him again. Despite their whispered adolescent promises, he never wrote her a single letter… at least none he ever sent.

Eight Tiny Flames by Crista McHugh
1944 Ardennes, WWII
Lt. Ruth Mencher has always secretly admired Capt. Joseph Klein, but it takes the lighting of a Hanukkah candle to uncover the spark of mutual attraction. Each night awakens a new facet of their relationship, but as the Battle of the Bulge begins, the approaching Nazi forces threaten to tear them apart. 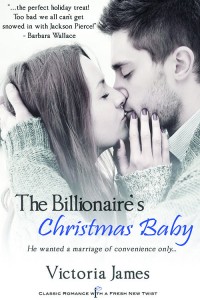 Jackson Pierce didn’t make his fortune entertaining every half-cocked idea, especially one involving diaper changes. Not even the cute brunette who links him to the baby in her arms can crack his icy heart.A baby on the doorstep is the least of Hannah Woods’s problems—she has to find the baby’s uncle, or the child will end up in foster care. She sleuths her way to the reclusive CEO’s doorstep only to find six feet of holiday sexy—and a door slammed in her face. But when Jackson comes around and urges they marry for little Emily’s sake, Hannah finds herself falling for the jaded billionaire and wishing for a holiday miracle of their own…

Bestselling Lux series to be issued in collector's edition volumes

Please Welcome Amy Andrews for Straight Talk! When you are getting ready to start a new book, what’s…

We are so excited to share that The Next Forever by Lisa Burstein is free for one week only! Be sure…