Forged by Fate by Reese Monroe 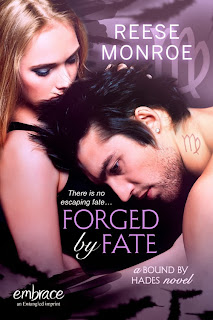 He’s waited more than 900 years to love her…

Being the Gatekeeper to Hades is no small feat, and waiting almost a millennia to meet your mate is damn near impossible. But Theo Bradford’s mark has finally surfaced on his intended. Now all he has to do is find her and convince her to embrace her supernatural heritage.

Young genius, Sadie Nowland, has got life figured out. Graduating college at the age of eighteen and accepting a six-figure job is just what she needs to prove she’s made something of herself. But when a strange tattoo mysteriously appears on her shoulder and Theo starts talking about Mates, it catapults her neatly laid out life into chaos.

Targeted by a vicious demon escaped from Hades, Sadie is thrust into the volatile world of Shomrei warriors and a connection to Theo her brain can’t comprehend and her body can’t deny. That primal bond proves more imperative to their survival than either could have ever imagined—and just may be the key to the world’s survival.

Originally from Minnesota, Reese Monroe currently enjoys living in the sunny Arizona desert with her husband of seventeen years and her loveable Shetland Sheep dog, Maddux. Monroe holds a degree in psychology from Southwest Minnesota State University and a master’s degree from the University of Iowa. When she’s not busy writing her next trilogy, she can be found pounding the pavement, training to run her first marathon.

Reese Monroe is a contributing blogger at the widely popular site New Adult Alley and has been part of the New Adult revolution for years having penned over twenty-five novels in the exciting new category.

To celebrate her release, Reese is giving away a $25 Amazon giftcard! Play along for a chance to win. No purchase necessary to enter or win. 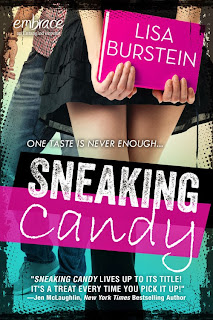 Lisa Burstein is a tea seller by day and a writer by night. She received her MFA in Creative Writing from the Inland Northwest Center for Writers at Eastern Washington University. She is the author of Pretty Amy, The Next Forever and Dear Cassie. She lives in Portland, Oregon with her very patient husband, a neurotic dog and two cats.

To celebrate the release of Sneaking Candy, Lisa is giving away several prizes. Play along for a chance to win. No purchase necessary to enter or win.

Tangling with the CEO Blog Tour

Indulge in Romance this December!

Saw Mamma Mia II TWICE! I was alone (both times), so I pretended to look for my date until th…