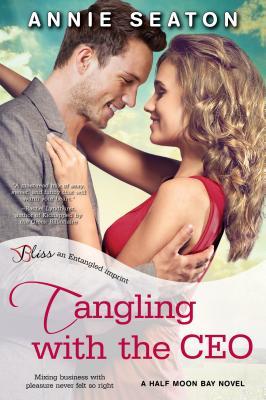 We’re excited to kick off the blog tour for Annie Seaton’s Tangling With The CEO — the first book in the fantastic Half Moon Bay series. You don’t want to miss it — it’s the perfect book to curl up with a cup of cocoa and get lost in during these cold December days. We’ve got a number of interviews with Annie, guest posts, reviews and more in store for you!

About Tangling With The CEO by Annie Seaton

Blake Buchanan and Anastasia Delaney were roommates in college and could never see eye to eye about anything. The only time their walls came down was during one night of passion before Ana left without a word, never expecting to cross paths with Blake again.

Years later, Blake has made his millions. He comes back to Ana’s small California town to manage a corporate takeover that will close down the home restoration business she’s poured her heart and soul into. The fiery Ana is determined to convince money-minded Blake of her business’s worth, but when a family emergency throws them together, their walls come tumbling down once again…

Problem is, Blake’s business-first position hasn’t changed. And Ana can’t fall for the man who could become her boss—it’s not only her job at stake, but her heart.

#GotHighlander? Take a peek inside The Highlander’s Accidental Marriage and prepare to …

I’m English but I live on an almond farm in the remote mountains of southern Spain, between the Sier…