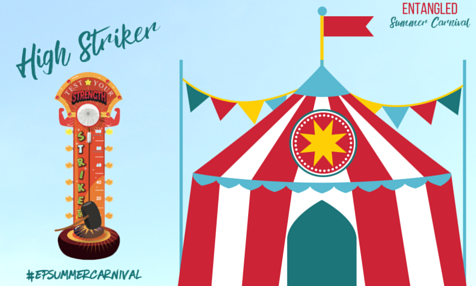 In honor of Entangled’s Summer Carnival, I’m going to share with you one of my most embarrassing moments (at least one of the ones I can tell in public *wink*). I spent eight years of my life in a small town, and the most formative years as well, from nine to seventeen. For eight months of each of those eight years, the ground was frozen, mostly covered in snow, and the only people outside were crazy pond hockey players and the guy who drove the snowplow. But for four months of the year, thirty-two months of my total stay in rural Manitoba, we had summer. Hot, sunny, glorious, bug-infested summer.

And the highlight of each summer in the town where I lived was the Icelandic Festival. I swear ninety-eight percent of the permanent population took part in the parade. People came from hundreds of miles away to visit the fair and watch large men wearing Fez hats zoom down Centre Street in tiny cars.

One Icelandic Festival parade I’ll never forget. Allow me to set the scene. Do you remember being fourteen? That wonderful time of life when your pimples were bigger than your boobs (at least mine were) and no matter what product you used your hair either looked like you hadn’t washed it in weeks or it stood on end as though you were permanently terrified. Personally, I’d have liked to have spent my entire fourteenth year in my room, reading all the romance books I’d recently discovered at the public library. But with only a few precious months to acquire my year’s supply of Vitamin D, I ventured outside to go with my family to watch the festival parade. First mistake, I should have gone with friends, not family.

We dutifully sat beside the road on a grassy verge, waving as the festival queen, the curling team, the local vet, and every other person who had a vehicle and/or a costume paraded by. I should have brought a book. Because then I’d at least have had something to hide behind when the local junior hockey team’s “float” appeared. It was a bunch of loud mouth boys wearing jerseys and shorts, holding their hockey sticks and riding in the back of a farm truck. As they neared, one boy, about seventeen, jumped down off the back of the vehicle, ran over to me and invited me to join him on the float. I politely declined, having no interest in either hockey or joining the parade. And that’s when it happened.

My knight in an oversized jersey, holding his hockey stick aloft, loudly declared to all in the vicinity that “a girl without freckles was like a night without stars.” My father laughed so loud I thought he’d hurt himself as he rolled around on the grass howling that that was the best line he’d ever heard and I had to go with the guy. You know, I should have, just so I could have seen my father’s face as I rode away on a farm truck with a hockey player, going all of eight kilometers an hour.

But alas, with my face so red you couldn’t even see my star-like freckles, I refused. To my eternal regret.

At least my dad had a good laugh.

What’s the best pick-up line ever used on you? And did you go for it?

Get your copy of The Greek’s Stowaway Bride today, on sale for just 99¢!

She slipped aboard his yacht, but can he keep her out of his heart?

Egyptian heiress Rania Ghalli is desperate to free her political prisoner uncle before it’s too late. Hoping to make it to North Africa, she stows away on the yacht of Greek millionaire Demetri Christodoulou. But when Egyptian agents board the boat, she can either jump overboard…or claim she’s Demetri’s new bride.

Tired of being no more than the bastard disgrace to the Christodoulou name, Demetri intends to build a luxury resort below his grandfather’s house so the old man has no choice but to acknowledge that Demetri has made something of himself. But first, he needs a wife to complete the land purchase.

With Rania now at his mercy, a plan comes together. He’ll play along, protecting her and helping to free her uncle, but in exchange, he demands a real marriage. But keeping the vivacious heiress out of his heart will be a lot harder than keeping her on his ship…

Gloria Craw: A Chaotic and Memorable Date at the State Fair and Carnival

New Epic Romance from Entangled Invite Your Friends! Have friends who love a good book and a …

Stacey Kennedy has an exciting book coming in April from Entangled Publishing.  WEREWOLVES BE DAMNED…