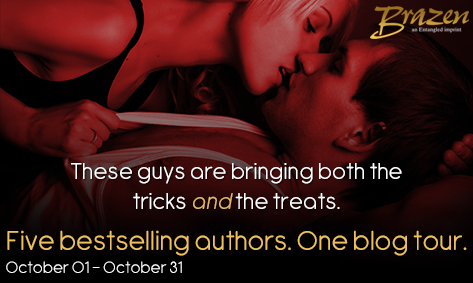 We’re thrilled to kick off the the month long blog tour for our Halloween reads! We have Tessa Bailey, Samanthe Beck, Christine Bell, Cari Quinn, and Katee Robert all on the same tour sharing interviews, excerpts, new scenes, guest posts, and giveaways! So be sure to follow along all month long!

This matchmaker’s about to meet her match…

Grace Love is lousy with men. She can spot a match for someone else a mile away, and her balls-on instincts are why her matchmaking business is thriving, but finding her own Prince Charming? The only guy who makes her sixth sense tingle is her playboy best friend, Trick, and no way is she risking their friendship, no matter how hot she knows the sex will be.

SWAT officer Trick Matthews is a patient guy, but Grace’s inability to see what’s right in front of her is grinding on his last nerve. Yeah, he blew his shot at breaking out of the friend zone when he tamped down the urge to lick her from head to toe the day they met, but he’s got a plan that’ll change her mind. Incognito at Salem’s hottest Halloween party, he’ll show her exactly how good they could be…and that he’s the man for her.

Mystery and intrigue surround Halloween night as friends surrender to long-hidden desires, lovers relinquish control, and the heat of passion threatens to consume them all…

Learn more about each story here

Entangled in the Wild Giveaway

Here at Entangled we love a sexy scifi romance with a dash of rogue-ish hero and heaps of adventure.…

In 2015, I decided that I wanted to walk Scotland’s West Highland Way, a 96-mile trail that r…