So much of life is “right place, right time.”  That’s certainly been my experience in publishing, always getting lucky enough to be in the right place at the right time.

It all started one snowing evening in Minneapolis over 10 years ago.  I was changing buses on my way home from work, and it was so, so cold.  In desperation I ducked into what I thought was a coffee shop.

It was.  Sort of.  This particular coffee shop was attached to something called The Loft Literary Center.  Fancy, huh?  I’d never seen anything like it.  The signs in the lobby announced book signings, reading nights, and writing loft space for rent.  The evening I stopped in, they had just posted a flier about the classes that would be starting soon.

By the time I got out of there, I’d missed my bus and found a brochure for a class on genre fiction that I was determined to take. 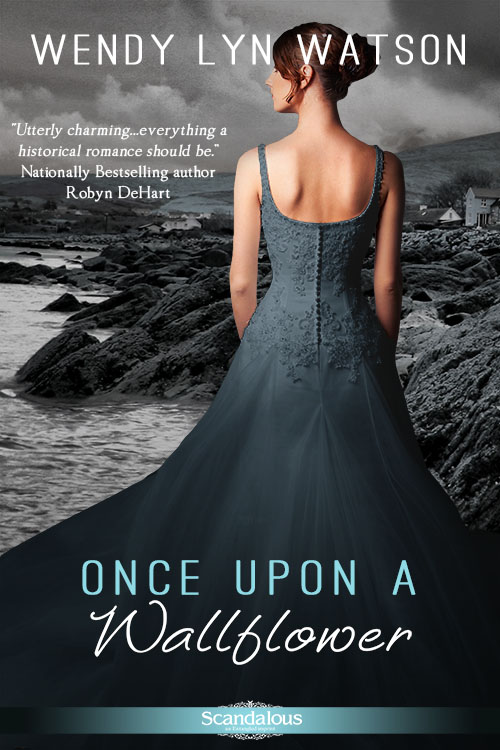 In that very class, I started weaving a dream I’d had years ago into an actual story.  Eventually, that story would become Once Upon a Wallflower, my August Scandalous release.  But not before I had found myself in a few more “right places.”

In 2004, I happened to enter an RWA writing contest with a story about a death-metal-guitar-player-slash-bridesmaid.  The story won its category and the judge, an editor, asked to see the whole thing (which I did not have).  Time passed, and by the time I finished that story, that editor had become an agent who agreed to represent me.

In the long run, that has been an extraordinary gift:  I have an agent who has been with me for a long time, one who really believes in me and my writing.  She helped me develop the cozy mystery series that finally got me published, and she continues to hold my hand through the rough patches.

My agent isn’t the only angel who’s appeared at just the right moment.  When I was between cozy contracts, one of my critique partners (the super-talented Melissa Bourbon/Misa Ramirez) suggested I dust off that first book of my heart, that historical  romance I started one snowy night in Minneapolis, and submit it to a new publishing house called Entangled.

Fast forward to today, and that story born between buses is out for the world to read!

I don’t mean to suggest that getting published is all luck.  There was a lot of hard work (and a few tears) involved.  But I do think that if you open yourself up to possibility, you might find yourself in some pretty amazing places!

About Once Upon a Wallflower

When Mira Fitzhenry’s guardian arranges her engagement to one of the most scandalous, yet devastatingly handsome lords to ever grace the peerage, all of society is abuzz. After all, the man has left a trio of dead young women in his wake, including his first fiancée.

Expecting to scare the chit away within five minutes of meeting him, scarred and brooding Nicholas, the Viscount Ashfield, is intrigued by the unfashionably lovely Mira, but his family’s dark secret means he must fight his attractions. No matter what his heart wants.

Posted in: Authors Speak Out, Behind the Book, FeaturedTagged: Historical Romance, Once Upon a Wallflower, Scandalous, Wendy Lyn Watson
Previous

Book Blitz Giveaway: Some Like It Spicy by Robbie Terman

It’s Romance Awareness Month and we’re dishing all month long about everything romance related. If c…

Monday, September 30th – Featuring the September Ever After Novellas A Little Fiction of Every…