The SEAL of Honor blog tour kicks off today and we can’t wait for you to meet the oh-so-sexy men of HORNET!

SEAL of HONOR, the first book in the HORNET series, is going on tour and author Tonya Burrows will be touring the blogosphere to bring you swoonworthy excerpts, interviews, guest posts and a one of a kind giveaway!

June 5 – My Book Addiction and More

June 7 – Reading Between the Wines

June 19 – Romancing Rakes For The Love of Romance

June 28 – Ramblings From This Chick 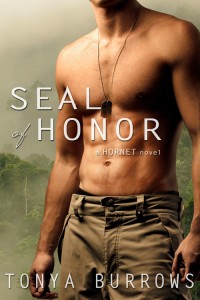 It’s a good thing Gabe Bristow lives and breathes the Navy SEAL credo, “the only easy day was yesterday,” because today, his life is unrecognizable. When his prestigious career comes to a crashing halt, he’s left with a bum leg and few prospects for employment that don’t include a desk. That is, until he’s offered the chance to command a private hostage rescue team and free a wealthy American businessman from Colombian paramilitary rebels. It seems like a good deal—until he meets his new team: a drunk Cajun linguist, a boy-genius CIA threat analyst, an FBI negotiator with mob ties, a cowboy medic, and an EOD expert as volatile as the bombs he defuses. Oh, and who could forget the sexy, frustratingly impulsive Audrey Van Amee? She’s determined to help rescue her brother—or drive Gabe crazy. Whichever comes first. As the death toll rises, Gabe’s team of delinquents must figure out how to work together long enough to save the day. Or, at least, not get themselves killed. Because Gabe’s finally found something worth living for, and God help him if he can’t bring her brother back alive.[/box]

When Honey Got Married Dating Game!

For my last birthday, my husband outdid himself.  In fact, he may have s…