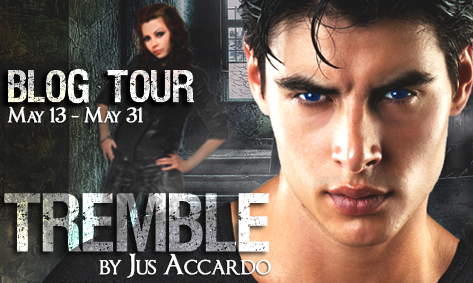 If you’ve been dying for more Kale and Dez, your wait is over! Tremble by Jus Accardo is here!

Follow the tour to find out what everyone thinks and if you haven’t already, get your hands on a copy now! 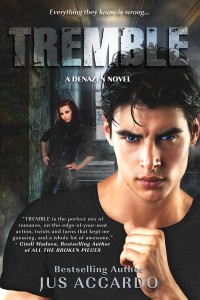 Dez Cross has problems. She’s almost eighteen and on the verge of losing her mind thanks to the drug Denazen used to enhance her abilities. People close to her have turned their back on the underground and are now fighting for the wrong side. And then there’s Kale… Things couldn’t get any worse.

Until of course, they do. Denazen is about to start a new trial—this one called Domination—and it works. But that means out with the old and in with the new. The order has been given to terminate all remnants of the second trial—including Dez. The good news is that there’s a survivor from the original trial. A woman who’s blood may hold the cure for the second generation of Supremacy kid’s defect. But the underground Sixes aren’t the only ones who know about her….

Cross is willing to throw everything he has to keep Dez from getting the cure—including the one thing that might tear her apart from the inside out.

Hold Me Down Hard by Cathryn Fox Blog Tour

Introducing the cover for Playing the Part!!

Today, Kerry Vail, an associate editor with Entangled Publishing, offers up the first entry from Ent…

The hubby and I recently took a sushi-making class. It was while we were in Mexico, bu…

Are you ready for another sneak peak at Entangled Publishing’s brand new, sexy novella line, F…