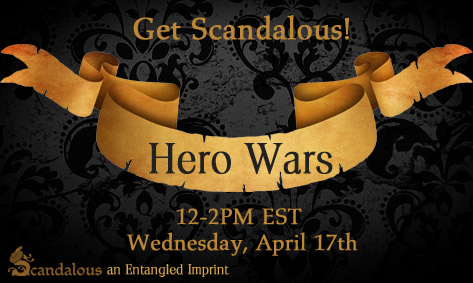 Get Scandalous with our heroes on April 17th!

Join us on our first ever Scandalous Hero Wars!

Who : Authors Robyn DeHart, Diana Quincy and Michelle McLean fight for their heroes during Scandalous’ first ever HERO WARS!

What: Join us for an afternoon of scandalous fun as the authors tell us why their hero’s better than the rest and if you’re lucky, you may be the winner of a Nook, among other awesome prizes!

Name: Marquess of Camryn “Cam”
Height: 6’2″
Weight: 187 lbs
Hair: tousled, tawny, wheat-colored hair
Eyes:  green with sparks of gold
Leading Lady: Bluestocking writer Charlotte Livingston
Bio: After inheriting his uncle’s title, Cam is the Ton’s most eligible bachelor, not only because of his gilded good looks and high title, but also due to his charming, easy-going nature. He’s intelligent and perceptive, which helps, since he’s got four younger brothers and two hoydenish cousins to keep in line. The magnetic marquess is also a forward thinker. He’s not one of those peers who thinks trade is beneath him. In fact, he’s invested in factories with those modern new steam-powered looms. His business concerns are what land him in a load of trouble with social reformer Charlotte Livingston, a woman who gets under his skin, and surprisingly, into his heart. When she rejects his advances, a determined Cam sets his sights on Seducing Charlotte.
Turn ons: Charlotte
Turn offs: All other women
Top or bottom? Both, of course! And that’s just for starters…
Favorite Quote:  “There will never be another woman for me. I’ve taken you to wife in every way that matters. When you leave me, there will be no other. You are the wife of my heart.”

Name: Leonardo “Leo” Forrester
Height: 6’3”
Weight: 185
Hair: Black, wavy
Eyes: deep brown
Leading Lady: Priscilla “Cilla” Richardson (aka the bandit Blood Blade)
Bio: Born and raised in Boston among the elite, Leo (named for one of his mother’s favorite artists) is Harvard educated, loves the outdoors, and wants to find his brother more than anything in the world. He is kind, strong, protective, and honorable, a gentleman who isn’t afraid to get his hands dirty, who has great sense of humor, loves to laugh, has a bit of a stubborn streak, and is sometimes prone to jump to conclusions.
He was sort of adrift, not sure what he wanted to do with his life until he meets Cilla. He’s impressed with her strength and feistiness. He fits in well at the ranch, loves to work with the sisters caring for the animals and property. Though a city boy, he spent summers with his mother’s family on their horse ranch in Maryland, so he knows his way around a ranch.
Turn ons: strength, loyalty, humor, spirit, and a great backside encased in a tight pair of men’s pants
Turn offs: whining, high-maintenance attitudes, selfishness
Favorite Quote: Do unto others as you would have others do unto you. [Matthew 7:12]

Name: Justin Rodale
Height: 6’2″
Weight: 190lbs
Hair: dark brown, longish
Eyes: dark brown
Leading Lady: Lady Clarissa Kincaid
Bio: He’s the bastard son of the Duke of Chanceworth. He doesn’t know the identity of his mother other than that she was a Frenchwoman. She was partially raised by another Frenchwoman, a music teacher, until she fell ill and Justin was sent to live with this father. Raised along side is half-brother and the heir to the Chanceworth title, Justin is educated as an aristocrat, but never accepted into their ranks. Now he’s the owner of the most lucrative gaming hell in London and though he knows his birth makes him an unacceptable match, he can’t help but be drawn to Lady Clarissa Kincaid…especially when she’s asking him for lessons in seduction…
Turn ons: intelligence and sass
Turn offs: dishonesty
Favorite Quote: “Love is not love which alters when it alteration finds…”

Now tell us, who are you rooting for?

Are you ready to TREMBLE?

Payback for 33 Valentines Can be...Full of Heart

7 Replies on Get Scandalous!

No tricks here, just treats for you! Entangled is excited to be celebrating our Halloween Spook-tacu…

Today, Kerry Vail, an associate editor with Entangled Publishing, offers up the first entry from Ent…