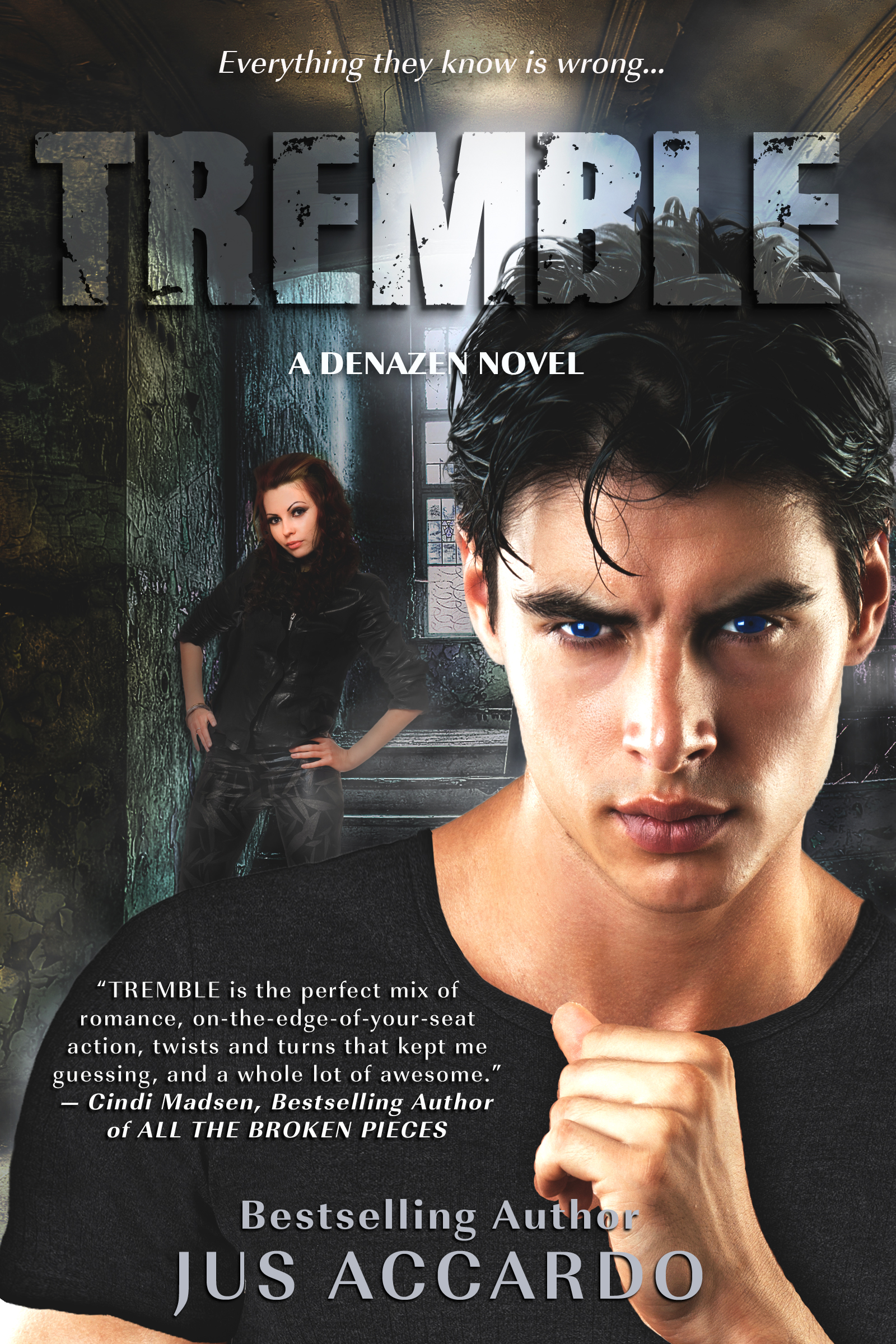 Denazen fans, are you ready to TREMBLE?

Tremble, the much awaited third book in the Denazen series, by Jus Accardo is almost here! Tremble hits the shelves on May 7th, 2013!

Meanwhile, take a look at the cover and let us know what you think! We also have an exclusive excerpt from the book that you don’t want to miss! 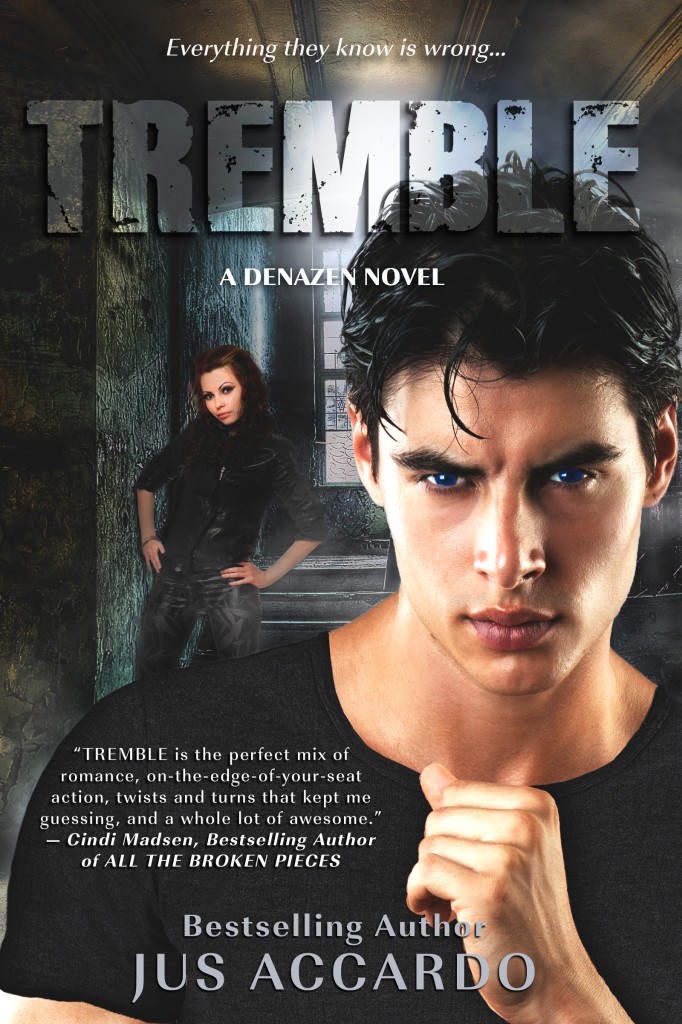 Dez Cross has problems. She’s almost eighteen and on the verge of losing her mind thanks to the drug the Denazen corporation used to enhance her abilities. People close to her have turned their backs on the underground and are now fighting for the wrong side. And then there’s Kale… Things couldn’t get any worse.

Until, of course, they do. Denazen is about to start a new trial—this one called Domination—and it works. But that means out with the old and in with the new. The order has been given to terminate all remnants of the second trial—including Dez. The good news is that there’s a survivor from the original trial. A woman whose blood may hold the cure for the second generation of Supremacy kids’ defects. But the underground Sixes aren’t the only ones who know about her.

Dez’s father is willing to throw away everything he has to keep Dez from getting the cure—including the one thing that might tear her apart from the inside out.

Keep reading for a completely swoon-worthy excerpt from the book!

“I told them you wouldn’t come alone. Yet here you are,” Kale’s dark voice said from the doorway. “You’re an odd one.”

“You don’t realize it, but coming from you, that’s kinda funny,” I said, swallowing hard and turning to face him. The light from the hall lit the entire right side of his face, leaving the left cloaked in darkness. Two sides of the same dangerous coin. I wanted to back away but resisted, meeting his gaze straight on. My Kale was in there somewhere—and he could sense weakness. “Did you kill her?”

He cocked his head to the left and I could see his expression. Confusion. “You asked the same thing about the other girl. Why does it matter?”

“Because it does. It matters to you, too. You just don’t remember.”

He took another step. Inches. He was inches from me now, the warmth from his body radiating like the sun. Every one of my muscles plunged into an all-out war with my heart. Common sense screamed for me to match his steps forward with ones away. Keep your distance—he’s dangerous!

My heart wanted to move closer. I wanted this to all be nothing more than a bad dream.

“I feel like…when I look at you—” He shook his head and placed a hand on either side of me, up against the mattress, and brought his face close to mine. For the longest moment all he did was stare. When he did speak, there was so much rage in his voice. “You stabbed me. When that didn’t do the trick, you pushed me from the bridge. I’m asking you why?”

“I never did that, Kale. No one’s ever pushed you from a bridge as far as I know. I promise. As for the scar, yeah. You were stabbed. Alex did it.”

“I’m not. And my name is Dez,” I said, voice cracking under the weight of his words. “Deznee.” I wasn’t ready to give up, so I went with what had always worked for me. Something insane.

Pushing forward, I crushed my lips to his, wrapping both arms around his neck to lock him in place. He didn’t resist and, to my surprise, didn’t shove me away. Instead, after a moment, he responded, his lips moving fervently with mine.

The kiss only lasted a few moments. I was the one who broke it, pulling away as the clouds passed, allowing the moonlight to shine through the bedroom window once again. For a second, neither of us said a word. His cheeks glistened with my tears, making it look like he’d been crying, too, as he stared—eyes wide and mouth agape—like he’d never seen me before.

For a crazy, insane moment, time froze. I thought maybe the kiss had done the trick. That this time the princess had woken the prince. He looked at me with a mix of shock and awe, the tiniest hint of my Kale gleamed through. My heart pounded so loudly I could barely hear anything else. It was there. I could see the spark in his eyes. “Kale?”

But it didn’t last. Or maybe it hadn’t been there at all. Maybe I wanted to see it so badly that I imagined the whole thing.

His lips parted and the corners tilted upward just a hair. “Roz is right. You are crazy.”

Are you excited? Leave a comment and let us know what you think about the cover and the excerpt!

Indulgence is all about powerful, sexy men and the women they love. They are the fantasy hero. Think…