When I decided to set my novella HOLD ME HARDER around Lake Pend Oreille (pronounced: pond-ə-ray, for those like me, who don’t speak French) in Idaho, I knew the landscape would be an important part of the story. Unfortunately, a lot of people conjure up only one image when they think of Idaho: potatoes. While Idaho potatoes are, indeed, yummy, I’d like to introduce you to the non-potato part of the state: Idaho’s panhandle, home to mountains, lakes, abundant wildlife, and a few quirky towns. 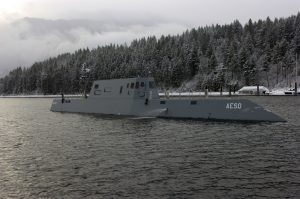 Like most of the natural lakes of the Pacific Northwest, Lakes Pend Oreille and Coeur D’Alene were carved during the end of the last Ice Age. Lake Pend Oreille is the fifth deepest lake in the United States. It’s even deeper than Scotland’s Loch Ness, but instead of a monster, Lake Pend Oreille boasts submarines and downed aircraft below its surface. The US Navy maintains a base on the lake’s southern tip where they test new, super-secret designs of submarines 375 miles from the nearest ocean.

Lake Coeur d’Alene sits 40 miles south, nestled in a valley bordered by two mountain ranges. Interstate 90 hugs the shore of its northern spur, and if you’re driving by, you can’t miss the lake’s bright blue, snow-fed waters, and the huge osprey nests perched atop the power line towers that line the interstate. It can make for a distracting drive, so it’s best to pull over at one of the viewpoints to take it all in. In nesting season, you’re likely to hear the osprey chicks squawking, or see one of the raptors hovering over the lake waiting to dive, then returning to the nest, fish in hand…er, foot. 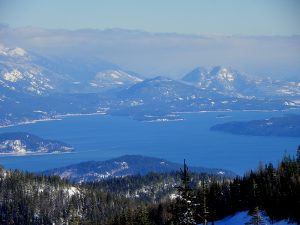 The small town of Sandpoint has gone from trapping settlement to logging town, and now is the recreational hub of the Pend Orielle area. In town, there are restaurants, breweries, ice cream shops, and day spas, to go along with the boat rentals, guided tours, fishing, and, of course, horseback riding in the surrounding hills.

Twelve miles north of the lake, and four thousand feet up, you’ll find the summit of Schweitzer Mountain Ski Resort, home to some of the best powder I’ve ever skied. The trails face south, providing a spectacular view of Lake Pend Oreille below. In summer, if you’re brave, you can mountain bike down the steeps, or just ride the lift up and down to take in the scenery and avoid scraped knees. 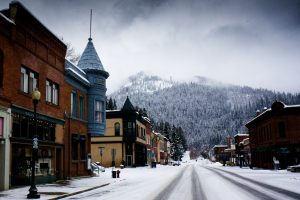 Fifty miles east of Couer D’Alene lies Wallace, Idaho, an Old West mining town that is still thriving, only now as a tourist stop. In Wallace you can tour the old gold and silver mines, wander an old-growth cedar grove, or you can visit the Oasis Bordello Museum. That’s right, tour a brothel, only it’s not what you might think. It’s one of those, “has to be seen to believed” places, but you can look here for a “sneak peak.”  What Wallace is really known for, though, is having been declared the official “Center of the Universe.” The mayor’s proclamation stated, “Wallace MUST be the Center of the Universe because you can’t PROVE otherwise,” and no one has. They even have an annual Princess of the Universe contest, extraterrestrials welcome.

With all there is to do and see in Idaho’s panhandle, it’s well worth a trip. You never know, you might even run into a sexy cowboy while you’re there. 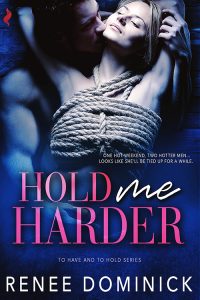 PR exec Natalie Lindgren is all business…until it comes to dealing with her craving for sexual submission. Two years ago, she walked away from the lifestyle—and her Dom, Javier. Now she’s back at his luxury guest ranch, not as his sub, but as a member of her sister’s wedding party.

But Javier’s not her only problem. Her ex, Ryan—who she left because his ideas to kink up their sex life veered too closely to Natalie’s former lifestyle—is the best man.

She’d thought she could resist the two dominant men, but with one touch Natalie is back under Javier’s influence, and one whisper has her aching for Ryan’s fingers tight around her wrist. How is she going to get through the weekend? Especially once the two of them join forces to remind her exactly what she’s been missing…

Renee Dominick is a lifelong resident of the US Pacific Northwest who got bitten by the travel bug at a young age. Now, whether it’s the energy of a big city, the thrill of Whistler Mountain moguls, the ancient streets of Pompeii, or the peace and quiet of stroll along a forest trail, Renee’s sexy romances are all inspired by her travels, near and far. When she’s home in Seattle, she’s always on the lookout for off-beat movies, reading, or working in the garden, ably assisted by their two terriers. Her husband, who doesn’t much care for yard work, is always ready with a back rub and a glass of chardonnay.

Entangled Under the Mistletoe with Kadie Scott

Home for the Holidays: Decorating with Robin Covington

We have so much hotness coming your way! Hold Me Down Hard by Cathryn Fox released on …