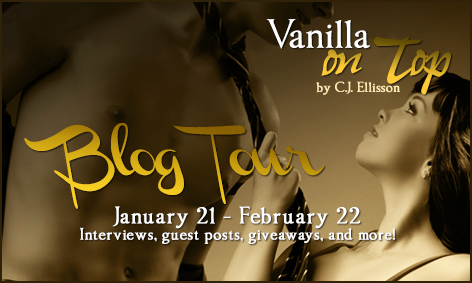 Vanilla On Top tour kicks off today! C.J. will be visiting blogs with fun interviews, guest posts, and great giveaways!

Discover your inner bad girl, and set her free…

Heather Pierce is done being a wallflower, both personally and professionally. Desperate to live a different life for one night, she attends a speed dating event. Maybe here, anonymous unless she chooses otherwise, she can become someone new. When a man way out of her league sits across from her, Heather gathers her courage and takes charge of what she wants, secretly fearing he won’t desire the real person she’s desperate to hide.

Top acquisitions officer and international playboy Tony Carmine is about to close the biggest deal of his career. But then he meets Heather at a speed dating event…and discovers losing control may be exactly what he needs. Her blossoming sensuality occupies his every thought, consuming him with the need to possess the most intriguing lover he’s ever encountered—until he walks into the boardroom and sees Heather on the other side of the negotiating table.

The Next Forever blog tour

The Made of Stars Blog tour by Kelley York kicks off next week hosted by Rockstar Book Tours! Kelley…