Give a warm welcome to Faye Robertson!  She’s here for a little straight talk. 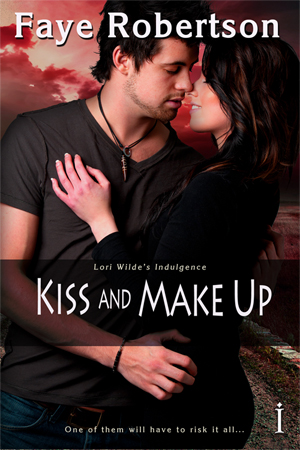 I like to think of an interesting job for the main characters—for example in Kiss and Make Up, the hero is a stunt man and the heroine is a makeup artist. I got this idea from watching the extras on Lord of the Rings! Then I play around with names—this is my favourite part!

A glass of wine and a box of chocolates! (I also indulge when I haven’t finished a book )

Getting my first fan email through my website was a big moment for me! Someone asked if I’d thought about writing a story featuring two characters from another one of my books – I was absolutely thrilled!

I’d love to meet Charlotte Bronte’s Jane Eyre. She was so spirited! And so courageous in spite of going through so much suffering.

Characters come first for me. And a general idea of setting, eg with Kiss and Make Up it was “two people meet on a film set and fall in love”. Then I think about each character’s conflict, and the plot tends to form from that.

I’m a nerd. I’m happy to admit it. I love playing videogames like Skyrim and World of Warcraft, and I adore sci-fi and fantasy films and series like Buffy, Angel, Lord of the Rings etc. I do write paranormal/fantasy romance too, and hope to write a lot more of it in the future!

I love the Lord of the Rings movies and it was after watching all the extra features that I got the idea for Kiss and Make Up.

Argh! Titles are HELL. Soooo hard. Sometimes they jump out at me, like with White-Hot Christmas, (although originally I’d called it I’m Dreaming of a White-Hot Christmas), and that stayed as White-Hot Christmas all the way through. Holly’s First Noel was originally called Christmas Stockings, and the new one took a few days to come up with. Kiss and Make Up was originally Dangerous Plaything, then Too Wicked for Heaven. I came up with Kiss and Make Up after a friend suggested Make Up Your Mind, with the double meaning because the heroine is a makeup artist. I liked Kiss and Make Up as soon as it sprung to mind because it sounded romantic, although I had lots of conversations with Entangled as to whether it should be Kiss and Makeup or Kiss and Make Up! We eventually decided on the latter, which I preferred. I do like titles with a double meaning, like Black Hawke Down, a novella about a warlock called Hawke who’s in the British Army, which echoes the military book with a similar name.

All the way along, I had the actor Craig Parker in mind for Eli (he plays Haldir in Lord of the Rings). He’s gorgeous. And I had a picture of Kristen Stewart who played Bella in Twilight – she’s dressed in scruffy clothes with black hair and it suited Tabby just right. I’m very visual, and pick photos early on.

Number one—never give  up! Writing is hard, soooo hard. Much harder than I thought it would be, especially the editing. They say the difference between a published writer and an unpublished one is that the former never gave up, and I really believe that’s true, if you’re willing to study your craft and never stop learning. There is only one magic button, and it’s grit/determination/stubbornness. There’s no other secret!

I’ve been a secretary all my life, and that’s helped because it means I type around 100 words a minute!

I have to say that although I read a lot, I’m influenced more by TV shows than books. Series like West Wing, Friends, House, Buffy, Angel, Firefly etc have had a huge influence on me—I love the clever humour and the wonderful relationships that Joss Whedon and other writers have, and I definitely think they’ve influenced the way I write.

Oh, plotter, definitely. I’ve tried pantsing, but I end up veering here, there and everywhere. I now follow the plot structure from the scriptwriting book Save the Cat, recommended to me by Heather from Entangled. It helps me make sure I have the right peaks and troughs in my writing, and that I have the Dark Moment and the rest of the big plot moments in the right place.

My house is very open plan, and there’s a small area that looks a bit like the space shuttle, or a cyber café, with four computers at four desks where we all sit! I have a desk in the corner with a pinboard and all the paraphernalia that comes with writing. It all happens there .

Both! I love the convenience of eBooks, but I still love to browse in a “real” bookstore.

Oh, where to start! More books for the Indulgence line, hopefully, plus I have several novella submissions with Entangled at the moment. I have three books coming out with Samhain Publishing this year, and three lined up for next year, fingers crossed that my editor likes them! And whatever else I can fit in along the way 

Faye Robertson lives in the sub-tropical Northland of New Zealand with her wonderful husband and gorgeous teenage son. She writes fun, flirty, and sexy contemporary romances for the modern woman who likes intelligent, spirited heroines, and hunky but approachable heroes. She’s won several romance writing competitions and is a member of the Romance Writers of New Zealand. She would much rather immerse herself in reading or writing romance than do the dusting and ironing, which is why it’s not a great idea to pop round if you have any allergies. You can check out all her books at  HYPERLINK “http://www.fayerobertsonromance.com” www.fayerobertsonromance.com.

This holiday season, get Entangled Under the Mistletoe! Entangled Publishing is hosting its v…

Winner: Reid Full Bracket Here   Reid vs Cole Round 1 Match 1   Thank you to The Hopeless …

Nollaig chridheil!( nollyk chree-ell ) Say it with a deep, sexy brogue and you have one of my Highla…