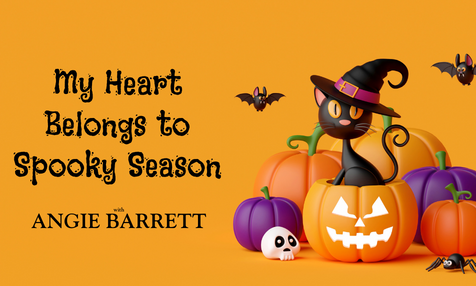 I fell in love with all things Halloween when I was really little. My dad bought me a book that was about a little witch who steals a broom and goes on a joy ride. I made him read it so many times that the book mysteriously disappeared.

After that, it was tv shows like Bewitched and The Munsters, The Addams Family and The Hilarious House of Frightenstein (Canadian show). These shows always had messages that being different was okay and that everyone has a tribe. As a redhead in the 80s (Don’t recommend. 0 Stars. Thank you, Annie), I felt like an outcast and these shows really gave me comfort because I felt understood. I was different. I stood out. The monsters all understood.

Fast forward through a brief but weird phase with hair metal bands (don’t ask) and I fell into a very serious Goth lifestyle. The catalyst was Ally Sheedy’s character in The Breakfast Club and for months my friends and I dressed like her. We wanted to be as aloof and rebellious as she was and it definitely had impact on how my identity shaped during those years. I was surrounded by freaks and geeks and we all made it a mission to be different and to celebrate our unique styles and attitudes. We did not like mainstream anything and stubbornly refused to fit in.

I devoured Anne Rice’s Mayfair Witches series and wanted to be a magic welding witch. I learned how to read tarot and write spells. I developed a reputation for being mysterious. I fell in love with Lestat and Louis and wrote a scathing letter to the editor of a local paper when the movie, Interview with a Vampire, didn’t get things totally right. I was convinced that there had to be vampires out in the world and if I were one, I’d jump to the highest, spookiest tree and watch the mortals without them knowing I was there.

I was 18 when I met Anne Rice for the first time and she said she loved my hair (yay for validation again) and told me I could be in one of her books because I had a “decadent” appearance. I stood in line for 18 hours one summer so I could meet another idol, Trent Reznor of Nine Inch Nails and Marilyn Manson, who was just a fledgling band at the time, was across the street from me that night and I had no idea that they were on the cusp of making it big. I missed a chance to see Nightmare Before Christmas in the theater because I thought it was getting way too much hype – I’m so dumb. I didn’t even buy any of the original toys even though my friends worked at a toy store and could get me a discount. Sometimes being all anti-mainstream is limiting.

I moved onto tattoos as I got older and began a serious collection of Halloween ink. I get absolutely giddy when I find another black and orange image or idea that I know would make a great tattoo. I saw Practical Magic in the theater and fell in love with that movie – to date I’ve watched it over five-hundred times.

When I wrote Love Spells and Other Disasters, I wanted to create an atmosphere that included my love for all things Halloween without overdoing it. The whole idea of a spell gone wrong as well as the consequences of meddling with love spells was something I’d thought about often as a teenager. I wanted Rowan to live in an old century home that others thought was haunted. I wanted her to meet a mentor who was a practicing witch and who would give her advice and a choice (shout out to The Craft). I wanted to take Rowan on a journey of self-discovery but with a little creepy and kind of ghostly twists.

Love Spells and Other Disasters is a homage to all things Halloween and my journey to writing it has been filled with ghoulish influence and magical ideas.

Are you a Halloween lover? Let me know! 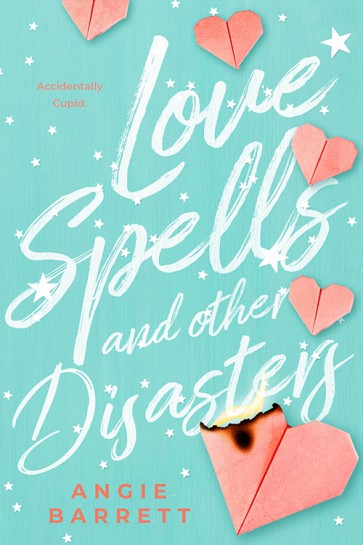 I didn’t know when I wrote the first love spell that it would actually make things happen. Like, actually make people fall in love with each other…

How could I have known something like that? I mean, magic isn’t real, right?

But here’s the thing—the spell does work and so does the next one and the next one…and suddenly I’m getting a whole lot of attention from everyone at my high school. Me, Blend-into-the-Walls, Please-Let-Me-Introvert-in-Peace Rowan Marshall. And not only that, but I’ve also caught the attention of Luca Russo, a godlike, football-playing hottie who claims he likes me just the way I am. Ummm…

But as I’m about to learn, playing around with things you don’t understand means when things go wrong—like really, very awfully wrong—you don’t know how to fix them.

Author Angie Barrett (https://www.authorangiebarrett.com/) lives in  a small town in Ontario, Canada in an old century home that is not haunted. She is a secondary school teacher librarian who loves the smell of books, Autumn and candy corn.

Love and Latte in Majestic Maine

Let’s talk Parks and Rec. Never has a sit-com about local government bureaucracy sparked so many epi…