My Forever Plus-One by Shannyn Schroeder

Evelyn is a woman who has everything–a successful career as a TV producer, and her best friend—sexy firefighter Owen Hanson—who looks mighty fine as her plus-one to awards dinners and backyard picnics. But something is missing and it’s not just the sex.

Owen Hanson is living the dream—a Chicago firefighter who volunteers at a youth center on the Southside and he’s got his best friend Evelyn—who knows him better than anyone. When Evelyn starts hinting about wanting something more, Owen panics.

Sex changes everything but taking their relationship to the next level surpasses even their wildest dreams. Until Evelyn’s ex-husband shows up and could make even the most perfect couple crash and burn….

There’s more to me than just being awk-weird. I own my own flower shop, have some great friends, and I have my eye on adopting the most adorable kitten. But sadly, hot guys don’t tend to be blown away by my trivia-spouting, dorky self.

So when a Thor-lookalike who happens to be a professional hockey player hits on me at my bestie’s wedding rehearsal party… You better believe I climbed that tree like a cat. And the fact that it happened not once, not twice, but three times? Yeah, that’s pretty much a once-in-a-lifetime experience for a woman like me.

There’s zero chance I’ll end up ever seeing him again…right?

Until the pregnancy test comes up positive. What happens next?

How to Capture a Duke by Tina Gabrielle

Lady Olivia, the youngest sister of the Earl of Castleton, has no patience for the boring gentlemen of aristocratic society. She longs for a more adventurous life like the ladies who visit the Raven Club. But her plans are thwarted when her family drags her to a country house party to meet the elusive Duke of Keswick.

Tristan Cameron, the Duke of Keswick, finds Olivia in his stables. She believes him to be the stable master, and he doesn’t dissuade her of the notion. He has no interest in entertaining one of the spoiled, self-indulgent ladies who’ve invaded his home. Except, Olivia is neither of those things, and their shared kiss during a ride results in combustible passion.

And a potential scandal.

Olivia is relieved when the handsome stable master comes to her aid as her alibi, but that relief fades to anger when she suddenly finds herself betrothed to the harsh, foul-tempered duke.

Tristan believes he’s been trapped by a scheming, title-seeking lady. To make matters worse, she’s utterly captivating. He plans on leaving her behind in the country immediately after their vows, but Tristan soon finds himself battling temptation and Olivia’s stubborn determination to be the Duchess he doesn’t believe he deserves… [/box] [learn_more caption=”Buy Now”]

Rachel Fortier is a much sought-after expert when it comes to exotic planets—especially the deadly kind. So when she’s hired by Earth Fleet’s most respected scientist to join a mission to the tightly closed planet Harp, it’s a dream come true. Until she discovers their mission is to capture shifters and sell them to the
Military.

Shifter Aidan Devlin is on patrol far from his clan when he sees a shuttlecraft landing where it definitely shouldn’t be. As the invaders emerge, he’s surprised to see a lone lovely woman, who doesn’t seem to belong. But when he’s captured and put in a cage, he has no one but her to help him escape.

Drawn together by a hunger they can’t resist, and desperate to discover who betrayed Harp, Aidan and Rachel first have to survive a deadly journey to the city. But once there, they find themselves confronted by a conspiracy that goes even deeper. Because Harp is harboring a traitor. And he’s willing to destroy their world—and everything in it—to get what he wants.[/box] [learn_more caption=”Buy Now”]

A Family by Christmas by Viv Royce

Chocolatier Emma Miller has a new business selling bonbons to the residents of the quaint town of Wood Creek. When a tiny visitor stops by her shop with an interesting request, Emma is intrigued. The young girl needs chocolates that will help her widowed dad fall in love, preferably with her teacher. What Emma didn’t count on was Casey’s ever so charming and handsome dad, Grant, stepping into her life. She has to remind herself to be cautious because the one thing she learned in foster care is that people always leave.

Pilot Grant Galloway is touched by his daughter’s gift and is curious about the person who made the world-class chocolates. But when he steps into Emma’s shop full of delicious smells and tasty morsels, he forgets to breathe. And it has nothing to do with his favorite dessert. She’s pretty and kind, and when she has to deal with a difficult client, his protective instincts kick into high gear. But he risked his heart once. When his wife died, it left him broken. He’s just now beginning to pick up the pieces, and he and his daughter will be leaving town once the holidays are over.

Thanks to some Christmas wishes, though, these two might discover that their carefully laid plans are about to change. [/box] [learn_more caption=”Buy Now”] 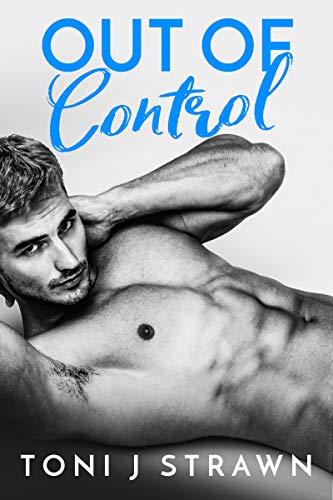 Out of Control by Toni J Strawn

The first week in my new city starts out about the way I expected. Lots of unpacking. Learning to navigate life with a new roommate. The buzz of excitement that I can be an entirely new person…and throw my restrictive past right out the window.

Who knew everything would change in one night?

Mr. Sexy Businessman and I start chatting at the local bar. Soon chatting turns in to flirting. Flirting turns into kissing…. And ends with the best sex of my life. He is so not my type, he’s far too in charge, but I can’t deny the explosive chemistry. The affair starts out normal enough, but then we’re both feeling totally out of control. Part of me wants to run for the hills… but another, secret part, wants to stay and ride the blissful insanity into the scary unknown.