Liam Cruz has had plenty of time and opportunity to find love. As a heavy hitting all star for the MLB team The Nashville Slammers, a talented cook, and a self-professed family man, he is quite the catch. It isn’t until Isla Bennett walks into his bar, however, that Liam understands why he’s still single at 32. There’s apparently only one woman who can steal his heart. And she just happens to be his new boss. 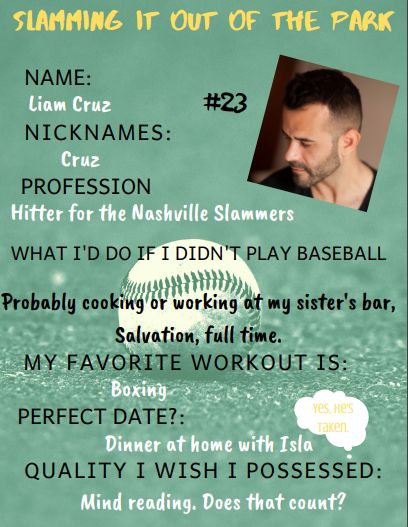 Check out Jody’s new release Covering all the Bases, out now!

Talk about a wild day… As if being summoned to the deathbed of a grandfather she didn’t know existed wasn’t enough––Isla Bennett meets the man of her dreams. Spends an amazing day playing tourist around Nashville with him. And then finds out she’s inherited the Nashville Slammers major league baseball team. Oh, and her new dream man? He’s the Slammers’ star power hitter. Isla just went from amazing first date to holy heck I’m your boss in the span of a day.

Liam Cruz can’t believe how refreshing it was to spend a day with someone who didn’tknow his batting average, the size of his last contract, or heck, even that he’s a baseball player. Now Isla’s thrust into the spotlight, and though she’s more than capable of handling herself professionally, he takes it upon himself to teach her everything he can about the game that is his whole life. But they’ll have to keep it on the DL.

Because doing what’s best for the team means they can never be together––and that might be the toughest play of all.

Posted in: Author Interview, Authors Speak Out, Behind the BookTagged: Jody Holford
Previous