Ah, to travel abroad and find new experiences and create new memories! Perhaps you might travel to this special place that I’m sharing—that could be the real-life setting of Torch in the Forest, in a wooded section of England in Yorkshire in 1272. The ancestral castle, held in trust for King Henry VII by Thomas, Lord Darcy, Baron of Templehurst, was called Pontefract and had a dark history, memorialized in some of Shakespeare’s plays as “Pomfret Castle.” Seriously! His great-great-grandson, my ancestor Edward Dorsey (note the name change from Darcy to Dorsey) emigrated to the United States in the 1600’s. Oh, well, so much for castles and the titles! 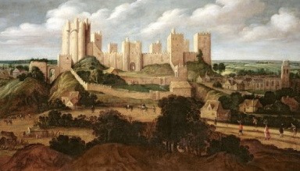 Visiting castles in England or in any country is a step back into the distant past, and, if you have traveled to castles, you know well how much fun it is to imagine the lords and ladies dining in the Great Hall, casting sidelong glances at each other, trying to conceal their turbulent feelings for each other, just as Lady Eleanor and Lord Hugh do.

When you have a chance to visit a castle in England, it is amazing to think of the thousands of people who walked or rode over the same drawbridge, across the moat, through the barbican, and into the castle. You can see in your mind’s eye the knights on horseback, rattling across the drawbridge ahead of you, their pennants held high. One of the first things you will notice, if you are American, is how amazingly old everything is and how thick castle walls are – often twelve feet thick. Of course, there are no modern conveniences, unless you are visiting a castle that the owners have renovated, and castles are cold and drafty. Those gigantic fireplaces, taller than a man, were necessary just for heat, especially in the chilly English winters. Tapestries on walls were hung not just for decoration but also for warmth. Along the walls, sconces holding tapers provide light and add to the atmosphere. The Great Hall is where all the action took place, the center of castle life, except for the kitchens, where the cooks sweated in front of fireplaces and naked kitchen boys (really – it was hot!) stirred caldrons and cleaned the mess as best they could. One humorous fact about castles is that the “buttery,” where Lord Hugh and Lady Eleanor have their first kiss – (that’s not a spoiler!) – has nothing to do with butter at all, but refers to the butts of wine – the casks – that are stored in that drafty room. 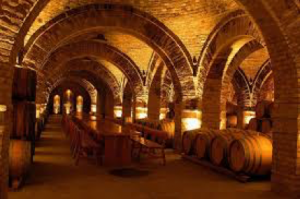 Wine was definitely consumed at most meals, along with such delicacies as stuffed, roasted peacock with the feathers still on it! It was a different time, indeed…

I hope you will have a chance to visit a castle in England or elsewhere or to return for another visit if you’ve been. It is truly a step back in time and can fuel your imagination, and who knows what romance might be kindled there?

Get Torch in the Forest for just 99¢! 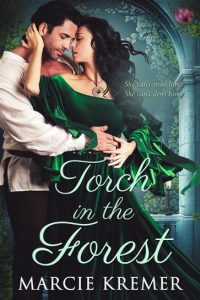 Eleanor of Strathcombe is stunned to realize she has a powerful attraction to Hugh of Wykeham, the arrogant, neighboring lord returned from the Crusade. But he wants to marry her sister, and when he learns that poachers are running rampant he blames her and feuds with her over the control of their forest boundaries. As she struggles to keep control of her forests and find the poachers, unsettling feelings confront her when she deals with Hugh, feelings she never felt in her brief, loveless marriage.

When she finds herself in the midst of a net of intrigue and lies, she needs to find the courage to capture the conspirators, save herself and her sister, and overcome her feelings for Hugh…even though that’s the last thing she wants to do. 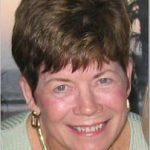 Growing up in Europe and seeing castles on a daily basis made me sure I wanted to live back in the Middle Ages. Since that wasn’t likely to happen, being a child of the 20th century, the next best thing I could try to do was to write about this enthralling period in history. Having studied medieval history in college, I loved doing the research about how people really lived and spoke and dreamed and loved, and so TORCH IN THE FOREST came to be, thanks to my dear husband, who encouraged me to write about Eleanor and Hugh. When I’m not writing, I’m reading, or traveling. I love hearing from readers and am happy to do book club conference calls!

To celebrate the final installment of The Caldwell Sisters Trilogy, by Lucianne Rivers, we’ve …

Falling for Her Soldier by Ophelia London is on sale for $.99 for one week only.  We can sit here an…